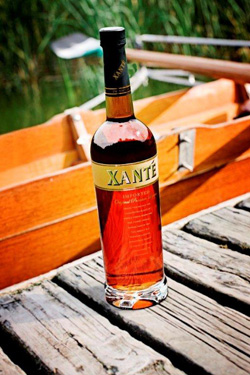 Xante. The word itself implies X-rated pleasure. Xante is luscious like the French cognacs it is made from. The sweet summery scent of infused Belgian ripe pears. The velvety play on the tongue. The warmth like a kiss of sun. The perfect summer drink. Xante is 13 years old and like all pubescents, ready to take on the world. Though extremely fashionable and popular in Europe, it has only been in North America for one year. The brand rolled out in Miami and New York and is available at popular cocktail destinations like W Miami's Living Room and New York's Nice Matin. It is is now in multiple markets in the U.S.-Boston, Seattle, Texas, with plans to officially launch in Canada next fall.

President and CEO Adele Nilsson tells me from her office in Stockholm that Xante sells 1.2 million bottles in Scandanavia where the entire population is only 23 million and Xante is the number two liquor of choice. The original owner discovered Xante in Belgium and brought it back to Sweden with him. He took it to the Vin and Sprit/Absolut vodka family. They loved it and Xante was part of that family of brands for 10 years but they parted ways three years ago. "We wanted to be in charge of our own destiny and to bring it into North America," says Adele, "and they were only interested in branding the vodka there. It was a good move for us, but it takes time to build a brand."

Xante comes from the same company that owns Cherry Heering, the iconic original cherry brandy and is distributed in the U.S. by Kindred Spirits, which handles only high quality premium spirits. President Joel Gosler tells me from his office in Miami that it is doing extremely well at $40 per bottle with the focus on on-premise sales. "We are just letting it go to see if it has legs," says Joel, "and it certainly seems to have legs. Mixologists are doing very well with it - using it as an ingredient and straight up. Adele visits us regularly, sets the strategy and we implement it. Markets are growing exponentially every month. We just let the brand do what it has to do." Joel says that Xante is primarily marketing to females that have "really broken the glass ceiling" - executives and CEOs who enjoy a girls night out and are very comfortable with themselves. They get a bottle of Xante and enjoy! 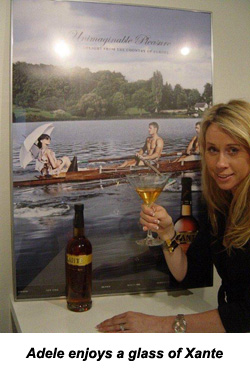 The target audience is modeled after Adele, who not only is a Valkyrian beauty who speaks five languages, but has a stellar career prior to coming onboard to Xante six years ago, including sales director of Europe for Voss with a Masters of Science degree in Business and Economics. The cheeky marketing campaign is definitely Adele's baby: Beautiful sophisticated women hunting or sitting primly in the bow of a rowboat with gorgeous buff studs eagerly retrieving game in the background or rowing vigourously. It's certainly a hit with the women I share Xante with-they just wish the guys came with the bottle. Adele says that guys get it and find it fun. "When we launch a product somewhere, we usually have a man stand up in the audience and read the label, which as you know, is quite naughty. He usually turns a bit red and the audience and him all have a good laugh...We now sell to men and women equally in Europe. It was 60-40 for awhile, but it is such a fine product, men did not want to miss out."

Adele says that the barriers to marketing a smaller, premium brand can be monumental and it takes time to establish. Getting into Seattle alone requires 100 accounts in the whole state of Washington and pre-orders before it is even on the shelf. And the barriers to trade in the 'controlled states and provinces' are really tough. "We just keep making inroads." A liqueur made of fine French cognacs, Xante appeals to people who do not usually like either liqueurs or cognacs. "I get some people say, I don't like cognac, but I love Xante, or I don't like liqueurs because they are too sweet, but love Xante because it is only 17 percent sugar, which is half the amount of the standard. It really is balanced. So people have to taste it and once they do, they love it." Studies show that eight out of ten people who try it like it. Adele says that because it is not a neutral or traditional spirit, it can get buried in complex cocktails.

"The very highest end of mixologists often love to have many ingredients which can obscure the taste of Xante. Simplicity is what works best. The home mixer wants simplicity for our unique product too. To be able to whip something up that is impressive and delicious without much fuss while their guests think it is fabulous. My favourite cocktail is the Xante Berry made with strawberries, lemon and Xante," says Adele. Joel prefers Xante on rocks with a little lime, while I love it neat in a chilled martini glass. The soft smooth flavours are released and my mouth becomes a garden of pears and cognac with a subtle warmth and chill from the glass - like a hot summer's day under the cool shade of a tree in an orchard in Liege and sweaty, shirtless, brawny fruit pickers plucking virgin pears from the trees...

Create your own fantasy with Xante - xtraordinary, xceptional, xcellent.

Xante is so scintillating, some of my favourite mixologists stirred up some xante-astic creations specially to be launched in this column and featured on premise. They understand that simplicity is what makes Xante really shine. As a bonus, I interviewed Mike Astins of the Library Bar- Fairmont Royal York in Toronto. The Fairmont sources Xante through Beam Global.

What do you like about Xante as a mixologist? It's truly a hidden gem behind any bar, this perfectly distilled Pear Brandy holds as much rank as any of the other Cognacs, Armagnacs and Grappas. On it's own, or mixed intensity of a fine cognac.

When did you first discover Xante? About a year ago it was introduced to the bar. We were left to investigate and experiment on our own when along came Pamela Irving who delightfully asked and questioned me on whether or not I knew much about this wonderful pear brandy(Xante), and if I had any attractive and delicious combinations on my cocktail list. Of course using Xante! Generally we served it on it's own in a heated snifter. But now because of Pamela, we are planning to introduce these new Cocktail creations to our menu. We are very confident people will enjoy them, and recognize Xante as a major player in the cocktail world!

What approach did you use to mixing these new creations! That's easy, because of its fine quality and unique versatility. The sweet pear, lemon and ginger tones evoke personalities for several mixtures. Also the help from my colleagues and regulars contributed to the final recipes. I have 10 years or more under my belt as a bartender, but I always value the opinion of others. That's been the secret to my success, let the people decide.

Do You think Xante works well with all? Yes, all my creations were meticulously formulated to work in conjunction with each ingredient. There were several other ideas as Xante is a wonderful product to work with, but only three were selected for this column and for introduction to the Library Bar. 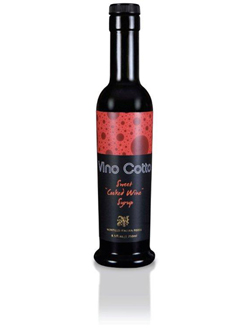 Syrup for Summer - Try Vino Cotto as a syrup in cocktails - it has a dry wine flavour with just a hint of sweet. I sampled some from Deena Montillo, Massachusetts and was so impressed, I asked mixologist Shawn Soole of Chateau Victoria to stir up some refreshing summer cocktails with it.

Vino Cotto is a naturally sweet "cooked wine" syrup made following the Montillo family's fourth generation recipe from Calabria, Italy. Montillo Italian Foods produces authentic Vino Cotto which contains no alcohol or vinegar, making it quite a versatile ingredient and condiment. Its delicious, centuries-old flavour tastes like figs but is made entirely of premium wine grapes. Requiring nearly 3 pounds of grapes to make just one 8.5 fluid ounce bottle, it's a natural source of energy and antioxidants to benefit the immune system.Typically used in both sweet and savoury dishes, Now that Pamela has coordinated efforts with master mixologist Shawn Soole and others, with their talents, Vino Cotto di Montillo is now considered an essential ingredient found in refreshing cocktails and non-alcoholic beverages and we look forward to working more with this industry-- Deena Montillo, www.montillos.com