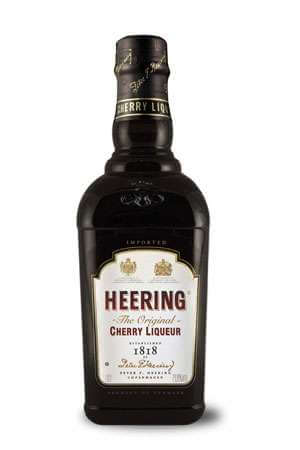 Why is CHERRY HEERING one the most classic ingredients of all time? This lineage of cocktail history is the backbone of Cherry Heering liqueur. Cherry Heering Liqueur has been around since 1818, and has the seals of nobility and style behind the Heering name. Cherry Heering Liqueur was created by Peter F. Heering and blended into cocktails associated with the entire British Empire and many other Royal Courts throughout Europe.

The cherries that are used in Cherry Heering Liqueur are carefully pressed to open the pulp and allow the spirit to penetrate. The cherry mass is then gathered up in wooden casks, where natural spirit is added together with a finely blended selection of spices A century ago gold medals provided a seal of approval that Cherry Heering liqueur possessed the proper style, class and breeding to socialize with Russian Tsars and English Dukes.

The modern day seal of approval comes from the top US mixologist in top high end bar and lounges who are creating cocktails with the ultimate cocktail accessory - Cherry Heering liqueur.

Cherry Heering is more relevant than ever, being an indispensable component of trendsetting and classic cocktails. Enter the world famous Singapore Sling - by contributing to the legendary Singapore Sling, Cherry Heering establishes itself as an accessory that adds lavishness, extravagance and civilization to the cocktail mix.

Cherry Heering liqueur acknowledges a heartfelt dose of appreciation to those who have helped make Cherry Heering liqueur a legendary part of history including The British East India Trading Company, a fine lineage of Russian Tsars, Sir Humphrey, the Duke of Marlborough, Kings Gustav IV Adolf and Gustav V of Sweden, the Kingdom of the Netherlands, the Empire of Japan, the Kingdom of Greece and every Royal of the past two hundred years but most cordially to the Kings and Queens of England.