If you close your eyes and take a sip of Schramm Vodka you may taste a hint of smokiness with the lingering tang reminiscent of a Scottish malt whisky. If this is vodka, just what gives it that malt flavour?

Unlike most vodka distillers, master distiller and owner Tyler Schramm, 32, does not use standard enzyme agents to convert the starch in potatoes to sugar because they might have GMO products in them. Instead, he uses a certified organic method of providing the necessary enzymes that he discovered while studying in Scotland. This is added to the other pure ingredients of water, potatoes and yeast. "Everything is certified organic, because you can not claim to be pure, if you are not," says Tyler.

Tyler attended the University of Edinburgh in 2006 to study for and receive his Master's of Science in Brewing and Distilling at Herriot Watt College's world-renowned program. "There is no way that I could do what I do on a daily basis without the knowledge gained in Scotland. Potatoes are notoriously hard to ferment properly because of their high moisture content. I was able to use the lab over there to figure out how I could make it work. I knew I was going to be working with potatoes in the future and all my projects and research was on Potato Vodka," explains Tyler.

He was in Scotland, home of the best whisky in the world. The MSc in Brewing and Distilling is broken down into 75% brewing and 25% distilling and of that 25%; 24.99% covers Whisky with only .01% covering other liquor, and he was there to make... vodka? The brunt of many a ribbing from other students and profs at their favourite Edinburgh pub, appropriately named 'The Illicit Still,' Tyler Schramm is showing them now. "Many professors could not understand why I wanted to make a 'flavourless' spirit. It was my job to convince people that craft distilled vodkas do not have to be flavourless. Our vodka has a rich, complex character and a subtle but noticeable flavour and aroma that makes it stand out from most other vodkas," says Tyler. 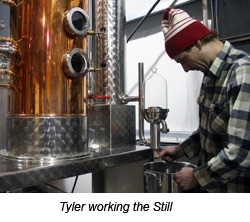 It is so outstanding that Schramm Vodka is an Olympic Showcase Spirit in BC liquor stores and was chosen by the Georgia Straight's Jurgen Gothe as one of the best spirits of 2009; and they have only been distilling since July 2009.

"The Still, as we affectionately call it, is from Germany made by Arnold Holstein. I knew about them before going to Scotland and a couple of my professors suggested that A.H. makes the finest quality small-scale pot stills. That was enough to convince me. Our still is 500 litres which is pretty small by Scottish standards. It's a modified pot still, with a rectifying column-to increase the amount of reflux-with a series of plates in it for increased refining."

The potatoes are grown only 15 kilometres from the distillery on Across the Creek Organics Farm, a third generation farm in the Pemberton Valley, aka Spud Valley for its quality potatoes. The Schramms' goal was to produce vodka that was similar to traditional Eastern European vodkas that have taste, character and aroma. "To achieve this we only double distill and use a distilling technique similar to how a single malt whisky is distilled. Many vodkas, even some 'craft' distilled vodkas are produced using ethanol coming from industrial distilleries - these can produce 10,000 litres of spirit per hour - this leads to a vodka that is over distilled. All of the character from the raw material is removed. I am also extremely selective about the spirit that I collect for our vodka to ensure we are producing a very high quality product. One of my goals was to produce a vodka that was enjoyable to drink neat or on the rocks, which I believe we have achieved."

I'd say so! and judging by how busy they are, so would most others. Tyler has not had a break, not even a day, since that fateful day of their first batch. "I'm the victim of my own success," he says wearily, happily. "If you had asked me five years ago if I would be doing this, I would have said-no way." 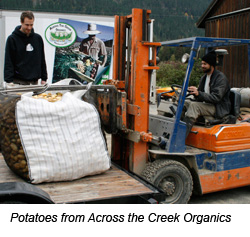 A native of Canada's West Coast, he was working in the coastal mountains on ski lift equipment, but often mused about making vodka in the Polish tradition using potatoes, which were plentiful locally. His girlfriend, Lorien Chilton, with a commerce degree from University of Victoria, (now the communications coordinator for the company), encouraged the idea by stumping out a solid business plan. "I applied to Herriot-Watt, and it just all seemed to come together," says Tyler. With Tyler's exacting nature and degree in environmental sciences, he was a natural fit for distilling. "I like to get things right." He got something right- his product is supreme and he is marrying Lorien next summer - the business brains and beauty of his dreams.

Not sure if he means the vodka or the courtship, but we'll move on.

Their fathers believed in them from the start, endorsed the vision with a bit of financing and they were on their way. The Schramm brothers built the distillery in harsh winter conditions. "It's really a family affair," says Tyler. Bottling is done by hand and everyone joins in, including his two brothers and their wives, his parents, Lorien and her parents. The final product is beautiful inside and out, with original artwork on the label of landmark Mount Currie-a sacred mountain to the First Nations people-its talismanic effect is evident in the quality from start to finish. The glass of the bottles is from France, the bottles are made in Vernon BC, the cork is pressed and thus more sustainable than traditional cork and Canada's certified organic label-just released in June 2009-never looked so good.

The $50 price tag may seem steep, but factor in that it costs about $10 to produce one bottle and the provincial liquor board and federal government takes another 72% of the retail price, there is not much left for the master distiller to pay his bills. Tyler is pleased with the support of the local people-the Pemberton liquor store is their biggest market-with locals buying plenty for gifts for Olympic guests.

But what about that smoky taste? It grooves on the palate and soon you will wonder how you ever drank more 'tasteless' vodkas. Drink it straight up in Edinburgh crystal or with a few rocks or a little water to release the flavour and you will have a new ritual to replace malt whisky on Robbie Burns night, weddings and births.

I highly recommend Schramm Vodka in my deliciously delicate signature cocktail-Simply Saskatoon- profiled here and designed by Lorien especially for this scribe. I wanted something simple made with the wild indigenous fruits of our organic farm-Saskatoon berries. You can use blueberries if you do not have access to Saskatoons. Either way, it's a post-modern symphony on the tongue.

Drink less. Enjoy more. And root for your favourite Olympian athletes in the upcoming weeks while sipping Schramm however you like it-truly the Champion of Taste.