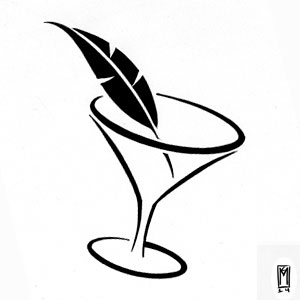 Stir everything with ice and strain into a chilled cocktail glass. Garnish with a lemon twist.

Last time around, I supplied you with a handy list of people you'll probably run into sooner or later when you're in a bar. Here's a few more. If you're ambitious, you can make a point of trying to spot as many as you can. It's like bird-watching, except with booze.

The Serious Sports Fan: Usually clad in some combination of shirt, hat, jacket, etc., bearing sports team logos. Often male, but depending on the city, large numbers of females may also be present. Always found near a TV, The Sports Fan will provide frequent commentary as well as loud outbursts of happiness/frustration regarding whatever sporting event is being shown. May spontaneously high-five or hug complete strangers. Appears to subsist solely on fried appetizers and cheap macrobrewed beer.

The Live Music Enthusiast: This species is focused solely on watching whatever live music act is playing on a given night. Often the friend or significant other of the musician(s), The Live Music Enthusiast will appear uninterested in any social interaction (with the exception of other LMEs). Arrives well before the music starts and lingers for a remarkably long time after it is over. Will buy one drink and make it last throughout the entire evening.

The Bachelor Party: Exclusively male and found in packs of three or more, The Bachelor Party is usually distinguished from other similar groups of bar-going males by arriving in a rented limousine or party bus. Highly mobile, The Bachelor Party will often restrict themselves to a single drink or round of shots before moving on to another bar to repeat the process. One member of the pack will clearly be identifiable as the leader, usually ordering all the drinks and loudly discussing the itinerary (which always involves a strip club).

The Bachelorette Party: Kill yourself.

The Elderly Couple: This species is easily identifiable by their formal attire and advanced age, which often appears in stark contrast to other customers (depending on the bar). The Elderly Couple's presence will often signify celebration of an important life event such as an anniversary, retirement, etc. Females will usually be drinking Bailey's, Kahlua & cream, or Grand Marnier, while males will generally be found enjoying blended whiskey on the rocks. This species usually avoids contact, but can be quite social if approached politely.

The Blind Date Couple: This pair will always enter the bar separately, and their unfamiliarity with each other will become evident to everyone within minutes of arrival. Awkward verbal exchanges and tense smiles will be noticeable. Both members of the pair are usually well-dressed/groomed, and jewelry is often prominently on display. Drinking & eating is usually minimal. After the date concludes, it is not unusual to see one member of the pair return later to drink in solitude and vigorously interact with his/her phone.

The Academic: This person will immediately open a laptop or classic novel upon arrival. While normally encountered in coffee shops, this species will occasionally roost in bars, turning their seat or table into a makeshift office. Can often be seen scribbling fragments of text or arcane diagrams in a small notebook. May become irritated with anything that interrupts their important work. Will likely be wearing at least one plaid item of clothing.

The Executive: Often found in pairs or larger groups, The Executive is most often identified by his/her professional attire and a seeming inability to discuss anything other than work-related matters. Drink choices vary, but consumption will usually be rapid. Members of this species are often fidgety, checking their phone constantly and preferring to stand rather than sit. Almost always encountered during the lunch rush or happy hour.

The Foodie: This species has no consistent markings, making visual identification difficult. However, upon receiving a menu, The Foodie will immediately display behavior that indicates his/her classification. This species will extensively question the staff about ingredients, preparation, and presentation of various dishes, making a variety of vocal and facial expressions indicating excitement or displeasure. May send even the simplest menu items back to the kitchen for vague reasons. Frequently photographs their meal. Can often be observed composing an online review while still seated.

The Wasted: This person will be significantly intoxicated upon arrival, or will initially appear sober only to achieve a state of noticeable drunkenness soon after ordering their first round or two. Male and female specimens are spotted with equal frequency, and will be observed rapidly consuming alcohol in a variety of forms. Paradoxically, their level of intoxication will be apparent to everyone but themselves, and it is not unusual to find The Wasted emphatically defending their perceived sobriety with anyone who questions it. This species is not to be confused with The Professional (see Part I), whose massive alcohol intake does not impact their outward behavior and appearance.

The Lovers: This mated pair takes every opportunity to shamelessly indulge in extensive public displays of affection. Frequency and intensity of their involvement with each other may be observed to increase proportionally with rate of alcohol consumption. Not only will their ritual mating behavior be completely unaffected by the presence of onlookers, but many members of this species appear to deliberately position themselves in order to maximize their visibility.

The Bourbon Buff: Almost always male, the Bourbon Buff will firmly eschew other whiskey categories in his fanatical pursuit of finding the "best" bourbon. May occasionally agree to try a bourbon-based cocktail, but in most cases will insist on drinking it neat or on a large lump of ice. Has been to Kentucky at least once. Will never fail to mention Pappy Van Winkle at some point during conversation.