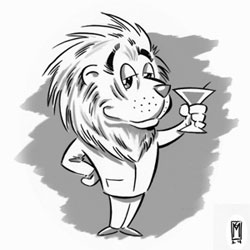 Shake everything with ice and strain into a chilled cocktail glass. Garnish with three celery slices on a skewer.

Anyone who has either worked in a bar or visited one will notice there are certain types of customers you tend to see again and again. The places may be different, but certain people are always there. Go often enough, and you're sure to meet them all. To aid in identifying them, I humbly provide the following list.

The Professional: This species can drink a terrifying amount of liquor in a brief period of time with no discernible effect on their speech, motor skills, or mood. Their heroic tolerance for alcohol has no doubt been honed by years of dedicated daily drinking, and this diligence has paid off in allowing them to cheerily consume quantities of booze that would render an ordinary human comatose. Unlike the stereotype of the slovenly, skid-row barfly, this person is well-groomed, polite, and invariably upper-middle class. Will likely try to engage you in a discussion on single-malt Scotch or European red wine.

The Vodka Drinker: This species appears to subsist entirely on vodka. Vodka & tonic, vodka & soda, vodka martinis, Moscow Mules, whatever...as long as it's vodka. May exhibit brand loyalty (if this is the case, it will always be either Grey Goose or Ketel One), but just as often will drink whatever is in the well. In most cases, this person is an alcoholic, novice drinker, or simply boring.

The Bewildered: Either old or young, this person will clearly be out of their element. Younger specimens will likely have never had a drink anywhere outside of a house party, and older ones may not have been inside a bar since the 1970's. In almost every instance, this person has been brought by someone else. If presented with even a modest drink list, they will immediately become flummoxed and order something like Bailey's or a glass of Chardonnay just to end the discomfort.

The Beer Nerd: This person will immediately ask for a draft list, though may consider something in a bottle if the selection is deemed worthy. Gregarious yet smug, the Beer Nerd outwardly projects a blue-collar image that belies an intense elitist streak. Will proclaim certain beer styles superior and scorn others based on seemingly arbitrary criteria. Beer Nerds often travel in pairs, animatedly discussing topics such as hop varieties and vague plans for opening their own brewery. This species can sometimes rival the Wine Snob (below) for pretentiousness.

The Wine Snob: If you see one, run.

The Cocktail Enthusiast: A relatively new species. Telltale markings may include vests, vintage-style brimmed hats, and meticulously groomed moustaches. Although often male, female Cocktail Enthusiasts make up a significant portion of the community, and easily match their male counterparts in knowledge and stamina. Females lack the consistent marking of the males, but are still recognizable by their ability to swiftly analyze a cocktail menu and pinpoint noteworthy ingredients. When encountered in the wild, there is a likelihood the Cocktail Enthusiast will have at least one bottle of obscure bitters and a copy of Imbibe! somewhere on his/her person.

The Special Snowflake: Easy to spot. Within seconds of entering, members of this species will loudly announce their preference for vegetarian, vegan, gluten-free, dairy-free, low-carb, etc., food and drink. Mostly encountered in urban environments where their dietary choices are more easily accommodated.

The Service Industry Worker: This person is a chef, bartender, server, etc., from a neighboring establishment. They are most often seen during the early part of the week, as most members of this species spend their weekends catering to the others on this list. Tattoos and piercings are often prominent. Will likely be discussing their co-workers' social/professional lives. May arrive singly or in pairs, but are frequently joined by others, rapidly forming a flock.

The Local: Age, gender, markings, behavior, and drink preference will vary widely. However, members of this species will always live within eight blocks of their chosen bar. The Local will always walk, regardless of weather conditions. Will likely arrive three minutes before the kitchen closes and order a large meal.

The Tiki Geek: Instantly recognizable by the flamboyant tropical shirt and facial hair. Usually male, but female specimens do exist (often marked by a flower in the hair and/or bamboo jewelry). Almost always drinks rum. Will proudly declare he makes his own falernum and orgeat. Can debate the merits of various Zombie recipes, and will do so vigorously with anyone foolish enough to raise the subject.

The Contractor: Likely clad in a t-shirt bearing the name of the company he owns or works for. Remarkably good-natured and friendly, considering he spent the previous 10 hours clinging to a roof or waist-deep in asphalt. Members of this species are worth sitting next to solely for the conversation potential. Drinks beer, or occasionally, Jack& Coke. Will eagerly point out shortcomings of local sports teams.