The Return of the Rusty Nail

by by Paul Zablocki

Back in the Eighties, when big hair and shoulder pads ruled supreme, as did Ronald Reagan in all his numbingly myopic splendor, I tried my first Rusty Nail. My friend Kristen waitressed at The Annex, a local basement haunt that fed and kept mirthful the hoards of Princetonians and townsfolk who hankered for a cheap drink and some cheap eats. Steak Diane was on their menu and it was the best bet, along with your typical strains of Manhattans, Martinis, and Whiskey Sours. I knew I liked bourbon - I got very drunk one night with a few friends, taking shots of Jim Beam- and Whiskey Sours were my go-to cocktail. They were sweet and sour, and they suited my taste buds just fine. Or so I thought.

Kristen suggested I try a Rusty Nail when I asked for some cocktail advice one night when she was off-duty and I should have been off writing another boring lit-crit paper. "What's in it?" "Scotch and Drambuie." At this point on my spirituous journey, I knew that scotch tasted different than bourbon. I didn't know what gave them their unique tastes, but I knew I liked bourbon more. "What the hell is Drambuie?" "Sweet scotch." "Okay, I'll give it a try."

I remember the first sip like it was yesterday. The scotch was fine - like I've said, I've sipped on scotch before and liked it just up to a point. If that's all there is, I'll drink it. But this time it was different. I really took a shine to Drambuie. I found out later what it actually is: a Scottish honey- and herb-flavored liqueur made from aged malt whisky, heather honey, and naturally, a secret blend of herbs and spices. I noted while sipping how it played with the scotch, smoothing out its rough edges.

Twenty years or so later, I find myself sipping on Rusty Nails when I'm in the mood for something potent, peaty-sweet, and old-school. There's nothing like one on a cool fall evening, perhaps in front of the first fire of the season, capping the night off with some friends with whom you've just shared a hearty meal. 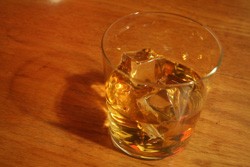 Stir in ice for 30 seconds and strain into an ice-filled rocks glass.

Visit Steve and Paul at CocktailBuzz.com for more cocktail and food pairing ideas.