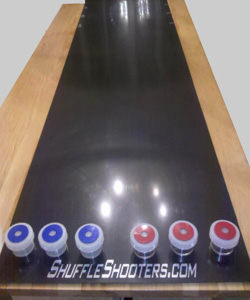 If you're familiar with me and what I do here at Bar None, then you're probably aware that I love books. I love reading them. I love writing reviews about them. Which is a good thing since that's my job!

But, this month, I'm doing something a little different. I'm still writing a review. But, it's not about a book this time. It's about a game. A fun, new drinking game called ShuffleShooters.

When I was first approached about reviewing the game, I was excited. I mean, I get to play a game, get my drink on, and it's for work?? Oh heck yeah, I was on board! So, I emailed Joe Della Valle, ShuffleShooter's creator. He sent me a little background on the game and I was intrigued. It sounded like beer pong and shuffleboard smooshed together to form a unique drinking game like I'd never seen before. He also sent me the game.

When I opened the front door and saw the big box on my front step I couldn't wait to rip open the box and check it out.

Nestled inside the cardboard was the game board and a bag of plastic shooters with red and blue caps. Let me warn you, the shooter cups look a bit like specimen cups you sometimes have to use at the doctor's office. But, anyway...

I unrolled the board and placed it on my dining room table. From being rolled up the plastic didn't sit quite right, so I couldn't play the game right away. I would recommend that anyone who gets the game should unroll it a day or two ahead of time so it flattens out or smooth game play.

While I waited for the board to flatten, I read the instructions so I would be ready to go. To play, you need to fill the Shooters with your beverage of choice. It doesn't have to be an alcoholic drink. Non-alcoholic would work just fine, too.

Game play is alternated and players can aim at other Shooters in order to get the advantage.

When all 6 Shooters have been played, the person or team with the highest score is the winner. The losing person or team has to drink the liquid from one of their Shooters. Sounds to me like the losers are actually winners!

Then the next round begins, and all Shooters are used even if they are empty. The winner of the previous round goes first, although going second is actually an advantage. It keeps going this way until one side finishes all of the Shooters.

If a round ends with a tied score, then both sides drink. Yes! A win-win! But, if a side drinks the last Shooter during the tie, then the game is over. The side with at least one Shooter left filled wins the game.

There are some tips that go along with playing the game.

Since full Shooters are heavier and work well for hitting other Shooters, then you should save those for last.

The vinyl scoring markers on the game board can slow or stop a Shooter, which is good to know for more strategic game play.

It's recommended that you don't use carbonated drinks in the Shooter cups. The movement will cause the liquid to fizz and spill, making for quite a messy game. This means you should avoid beer, soda, or any other carbonated drink you may like. Sorry, but it'll be easier for you if you do.

Should you make a mess, the board can easily be cleaned. Just use a product without bleach in it.

After a couple days my board had flattened and was ready for use. A good thing since I had asked some friends to come over and check out the game with us.

I had planned on playing outside that day, but since the weather can be unpredictable this time of year, I tried it out inside first to see if the game could be played indoors or if the cups would leak and be too messy. No leaks. Good! Luckily the day was nice and we were able to set up outside, but it was still good to know that the game could be played anywhere.

We brought a long folding table out into the backyard and placed the board on it. Next we filled the Shooters with a pre-made, non-carbonated drink mix. I let our guests familiarize themselves with the rules and then we go down to business. Thing were a bit slow at first while everyone got used to the Shooters and the board. It didn't take too long to figure out just how hard to push the Shooters and we were really getting into the game.

I won't go into a play-by-play of the game. I will tell you that my team didn't win the first game. But, that was fine with me, since we got to drink more than our competition. We ended up playing several games that night. We won some. We lost some. We all had a decent buzz going by the end of the night. All in all it was a fun time. Although the rolled up board doesn't allow for game play right away, it was well worth the wait. I'd recommend it to anyone who is tired of the same ol' same ol' drinking games and wants to try something different.