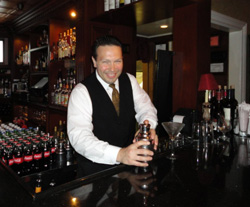 When most people think of Long Island, high real estate, proximity to New York, money and beaches come to mind. But when it comes to restaurants on Long Island, the awards have gone out and Best of LI, The New York Times, Zagat and Newsday all name the Mill Pond House in Centerport as a top-notch steakhouse. But the accolades don't just stop with the amazing cuisine. Mill Pond boasts one of the best sommeliers around, Mr. Sean Gantner.

Sean is the wine director and sommelier at Mill Pond and its sister restaurant, Piccolo in nearby Huntington. He has been charged with every aspect of the wine program for the restaurants for over five years, hand-picking the wines that are on the lists and poured by the glass. "I am responsible for maintaining the accuracy of the list, which actually needs to be updated several times a week between what we sell out of, the new wines brought in and vintage changes," he said. And for those who have frequented either restaurant, they know that space is limited, so in order to offer the array of selections (Mill Pond has around 575 and Piccolo around 500), he has to limit the number of bottles on hand. He spends countless hours keeping order in the cellar and hauling cases of wine up and down several flights of stairs in both restaurants, which he lovingly refers to as "The exercise I never get!"

And the work doesn't just stop in the cellar; Sean is responsible for meeting with reps from numerous distributors and scheduling on-premise tastings or visiting Manhattan for larger portfolio tastings. Staff education is a never-ending part of his job as well. "It's not enough to buy the wines and put them on the lists if the waiters and bartenders don't know anything about it... not that I expect them to be able to fill in a map of the great producers of the Wachau, but a little knowledge goes a long way in enhancing the guest experience and it seems the more they learn the easier it becomes to teach them. It's all about building points of reference."

At the restaurant, Sean's favorite role is that of host. Stopping by to visit each table, Sean becomes a member of the family and guests welcome him warmly. He is the official rock star behind every sip of grape at these award-winning restaurants, and all the guests know it. His work week starts on Thursday morning for unpack and restock day, translating to a lot of up and down the stairs carrying cases. Most of the weekend he can be found at Mill Pond House with an occasional appearance at Piccolo. While his days off are officially Tuesday and Wednesday, he knows the work never rests. "Hours?" he asked. "They're not 9-5 for sure. As the owner's father, Dino, reminds us, 'you want 9-5, go work in a bank!'"

Mill Pond also throws a number of wine dinners a year, up to six course affairs where Sean will work together with the chef to come up with fun pairings. Occasionally the theme will be national (France, Italy, Spain), or the staff will come up with pairings based on some of the interesting wines that Sean has recently been turned on to and feels compelled to bring to the public eye.

Sean enjoys his work at Mill Pond and Piccolo because he is in the position to make a difference. "The owners of Mill Pond (Dean Philippis and Thomas Abraham, Dean owns Piccolo exclusively) and GM Jen Koch all work hard to provide and foster an atmosphere of personal and professional growth in restaurants that strive to put out a great product," he said. "The food, the decor, the plates and stemware, everything costs money and they're not afraid to spend to keep the place(s) top notch." Sean has also been granted the freedom to operate the wine program, where he grew the wine list from a mere 185 selections to the point of pushing 600. With his "New Features" page which showcases undiscovered gems from around the world, featuring products from the French Alps to the Volcanic slopes of Mt. Vesuvius near Pompeii.

And how did Sean begin his illustrious career? "16 years ago peeling potatoes and working the grill at Nathan's Famous in Commack, Long Island." Since college, the industry started out as a way to make money everyday. It didn't take him long to realize that the hours were long, but he stood to make more in a night than most 20 year olds with part time jobs did in a week. While finishing his studies, he worked in various restaurants in New York and Las Vegas, but it wasn't until his last undergraduate semester at UNLV that he took his first wine course, "Foreign Wines." His professor, Jamie Smith, a Sommelier at Aureole in Mandalay Bay, made a great impression. "I'd majored in History and never expected a career in the restaurant industry, only signing up for a wine class because at the time it seemed like something that could only be helpful to know a little bit about in the â€˜real world.'" Sean found that he was able to fuse his knowledge of European history and geography with the information he was learning on the various wine producing cultures and regions. Before long he was reading everything he could get his hands on and breezed through the classes. Shortly after graduation, he moved back to New York and found himself working at the newly opened Mill Pond House, which was embarking on its first summer season. "With its picturesque waterfront location and al fresco dining, my transformation to cellar rat had begun. By virtue of the one class I'd taken in Vegas, I had more knowledge than anyone in the restaurant, so as the proverbial 'smartest kid in summer school' the responsibilities of bringing order to the list (correcting listing mistakes, vintages, updating '86 items), reorganizing the cellar, inventory and ordering soon fell exclusively on my shoulders. That spring I attended my first industry wine tasting and from there I was pretty sure this was a world I would thoroughly enjoy exploring." The rest, as they say, is history.

Sean didn't just stop with his first wine course in Vegas. Once he was fully "bitten by the wine bug," he realized he had a lot to learn. He started a three semester program with the American Sommelier Association in February of 2006. The first class is an 8-week intro that he recommends to anyone interested in learning the basics (which he tells customers all the time for a great foundation). "Exams every week made even the most diligent among us quiver and tremble!" With so much knowledge to try and get a handle on, those who survive the cumulative final embark on a 16-week Blind Tasting Class. "Never does time move so slowly, or so quickly, as the four minutes all eyes are on you while you attempt to dissect and analyze the wine in your glass," he remembered. "There were nearly two dozen points of analysis to touch on, and for the final exam you must identify 6 wines in 24 minutes." Throughout the duration of his studies (a year and a half), Sean was a Wine Steward. "It was only after I'd completed the classes that I could be referred to as the Sommelier, which has a decidedly nicer ring to it!"

Given the choice, Sean drinks a lot of Gruner (a white wine) and enjoys turning diners on to Austrian wines. "Something about all the umlauts," he noted. Behind the bar, there's nothing he can't live without. "It takes more than one monkey to the circus, and any ingredient or wine can be replaced, it's a just a matter of being aware of what's onhand," he said. "The point is that the key is to be aware of the flavor profiles the guest is looking for and the flavor profiles of the wines on hand. Most people will have a second glass, and if the guest is adamant about having a Malbec and all the other options have failed, you can be sure I've still got another trick up my sleeve."

Be sure to check Sean out if you are visiting Long Island at Mill Pond House or Piccolo. His palate will not fail you, and the selection he makes if you request it will be a perfect pairing to impeccable food.

"I have enjoyed the freedom and creatively seek out interesting and off the beaten path wines and bring them to the restaurant and to the public with the understanding that if I buy the wines, I will sell the wines, which fortunately has never been a problem," Sean said. "I'm also very lucky to have an adventurous and trusting base of regular guests who more often than not take me up on my suggestions to try every off the beaten path varietal that I've brought in, from Altesse to Zweigelt. Our "unique whites" and "unique reds" pages are among the most visited on the list, and the bonds I've forged with our customers over these acquisitions inspires me to continue the search for more."