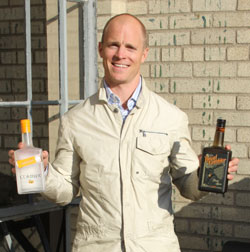 Bringing a Taste of France to the US

Scott Goldman wasn't always into spirits. In fact, before he stumbled along Combier, Scott was a kid with a dream of playing ice hockey.

After graduating college in Vermont, Scott flew to France with the ambition of playing professional hockey. "Playing in the minor leagues in the US was an option, but if I was going to get bruised up, I thought I might as well do it while learning French and taking in some great wines and cheeses," he said. Scott signed a one-year contract in the historic city of Tours in the heart of the "Garden of France." It wasn't long into the season before he became totally entranced by the farms, vineyards and distilleries that make the Loire Valley world famous and he almost instantly settled a property on the banks of the Loire River that stood out from the rest - Combier. "After meeting the Combier family, learning the remarkable history of the distillery (Gustave Eiffel helped design the distillery and Combier created the world's first triple sec in 1834), I made it my goal to introduce the product to America." The fascination with Combier turned into Cadre Noir Imports, the exclusive importer of Combier to the US that Scott set up with his brothers in 2006.

The rich history of Combier made it extremely attractive to Scott and has become his favorite part of working with the brand. "Combier is one of only a few distilleries left in the world that remains family run, creating a great history. All recipes and ingredients remain untouched since their creation, and every bottle is produced, packaged and shipped from the same location as it was in the 1800s."

Scott is a big fan of his spirit, and not just because it's French. "There is a reason triple sec is behind every bar in the world and in so many cocktails â€“ its versatility," he said. "Being the original recipe for triple sec, Combier's unmatched bright orange flavor is the perfect complement with Vodka (Cosmos), Tequila (Margaritas) and Cognac (Side Cars). Royal Combier with its herbs and spices goes exceedingly well with Tequila and Mezcal. Rouge's delicate cherry flavor goes particularly well with Bourbon."

A typical day for Scott starts with a sweat at his local gym. "Whether its weights or boxing, I need a workout to release stress and have time to collect my thoughts for the day ahead of me." From there, he heads to the office to hits the phones and emails, then on to his favorite part of the job...hitting the streets. "I'll spend the entire day driving around on my Scooter and seeing what bartenders are up to." At 7 pm he will head home to check on his family and on most nights back out again.

Scott finds himself on the road every other week visiting different markets around the United States, but his favorite place to visit is his home city of Philadelphia. However, to catch him on his bright orange Scooter, you have to watch the streets of New York.

His favorite part of working in the industry is the consistent-interaction with bartenders. "Their passion, creativity and attention to detail is astounding â€“ it's no wonder that we have seen such an explosion in the cocktail industry."

Scott's favorite cocktail? The Royal Smash, a take on the Old Smash cocktail 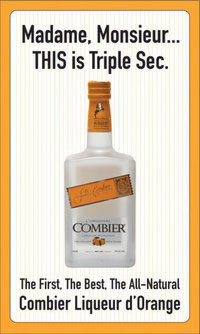 These days, Scott is at all the major industry events sharing a French cocktail and a big smile. With Scott's time in the industry, he has learned many important things. His best advice? "First and foremost, you must be passionate and 100% devoted to what you introduce to the States," he said. "Once you have that, it's important to have a rapid response to see and act on opportunities."