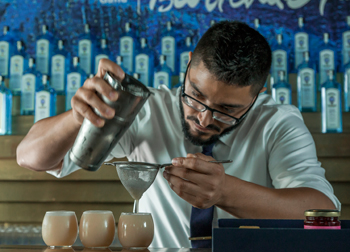 Earlier this summer, Boston mixologist Schuyler Hunton of Tiger Mama took home the North American Title for the United States Bartenders Guild's 10th Annual Most Imaginative Bartender Competition presented by Bombay Sapphire. Schuyler's winning cocktail, the Breakfast in Bombay, won the best cocktail recipe as well as People's Choice Award. Schuyler will be featured on a special edition cover of GQ's December "Men of the Year" issue with his winning recipe. He will also visit Tuscany to learn about the different botanicals that make up Bombay Sapphire. Bar None Drinks spoke to Schuyler about the fierce competition (which saw contestants from 33 American and 4 Canadian cities), his drink's inspiration and how he unwinds after a shift.

What was your inspiration behind the Breakfast in Bombay cocktail?

SH: I really wanted to take something antiquated like the serving of a soft poached egg and toast, and turn it into something new and innovative. I love the idea and presentation of an individual cocktail on a tray with accoutrements. It just takes the guest service and hospitality aspect of our industry to the next level.

How was it to compete in the competition? What was your favorite challenge?

SH: Bombay Sapphire's Most Imaginative Bartender Competition was incredibly intense, but also amazingly fun. I definitely was feeling the nerves aspect of competition, even though stress isn't something I typically feel. Competing against such amazing talent was definitely always on my mind. My favorite challenge was day 2, the Guest Bar Shift Challenge. Working a guest shift is one of those activities for a bartender that just feels somewhat wrong, but in a good way. You get to go into someone else's bar and have fun, make a mess, and then jet out of there. Just kidding, we all cleaned up after ourselves, but it's an amazing time.

You had to compete in front of a pretty elite panel of judges. How was that?

SH: Oh the judges, it can be hard for some people just making drinks in front of normal guests, definitely like stage fright. Now imagine if those normal people were incredibly talented spirits professionals (Bombay Sapphire's North American Brand Ambassador Gary Hayward, Pam Wiznitzer, Pablo Moix, Jacques Bezuidenhout, Kim Hassarud)...it ups the nerves and challenge 100 fold. That being said, the judges were great, usually you only craft in front of them once, but this time it was three times so you get more and more accustomed to the people in front of you. Also in our down time, we got to interact with them not in a competition setting which was awesome.

In your mind, what makes an imaginative bartender?

SH: An imaginative bartender is someone who takes their ideas and runs with them. They don't have to be making intricate competition cocktails, but the idea of just making something that's new and interesting to not only the guests, but for themselves. It is about pushing boundaries of both personal experience and what the industry has done before.

What are you more excited about, the visit to Tuscany or the GQ cover?

SH: Honestly the idea that I will be going to Tuscany hasn't really sunk in yet. I am super excited for that trip, but how cool is the idea of being on the cover of GQ? The exposure I will receive from that, I can't even yet imagine.

Where are you originally from, and how did you wind up in Boston?

SH: I'm from Vermont originally. I ended up in Boston for the same reason any man leaves home, for a girl. I found an amazing job before moving and had a couple friends here, so the transition was easy. I fell in love with the city, and the life I have made for myself here and am excited for what's to come this year with Bombay Sapphire.

SH: Tiger Mama is special because of our staff. Our chef Tiffani Faison is amazing - the food she creates still amazes me, even after having a dish 3 or 4 times I still am blown away by the flavors and complexity of each dish. In regards to the beverage program, our Beverage Director Charles Corkyndell is amazing, he gives us all the freedom we need while still giving direction when needed. Encompassing all of it is Kelly, Tiffani's wife and business partner, she is our rock. She gives direction, but supports all the insane ideas the bar staff has. All of that plus a bar team I am incredibly proud to be a part of. Our drinks are fresh and interesting, I am quite proud of the lists we have put out and even more excited for our new tiki list slated to come out shortly.

What is your drink of choice at the end of your shift to wind down?

SH: I usually default to a beer after work, I love sour beers and gose. Anything that is tart and refreshing, I love that style of beer. There is just something nice and refreshing to pop the cork, tab, or top and relax at the end of a long shift.

What do you want guests to walk away from your bar saying?

SH: Honestly, I just want my guests to be happy and content with their experience with me. I want them to feel at home and taken care of, just like family.

Any advice for winning a national competition?

SH:My first advice for winning a competition at this level is practice. Hopefully a competition like this isn't your first competition ever, because they are all learning experiences. To that note, compete as often as you can. Getting in front of the judges can be nerve racking, but being prepared and having done it before definitely helps calm some of your fears. Also, never forget that although you may be at a competition, it doesn't mean you shouldn't take in everything happening around you. It is a privilege to have been brought to London for MIB, and if I hadn't taken in the sites and explored, I definitely would view that as a missed opportunity.