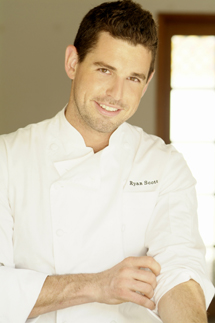 We all know that great mixologists are found in more places than behind the bar. Ryan Scott, the executive chef /owner of Ryanscott2go, proves that sometimes the best spirits are found in the kitchen being used by a chef's palate.

As the Executive Chef and Owner of his own company, Ryan works hard and plays with his food harder. "I am in charge and I write my own schedule, working 7 days a week, 12-16 hours a day," he said. "When you own it, it's your responsibility...that's why I don't stop."

Ryan set up shop in his kitchen at the ripe young age of 9, watching chefs on TV before Food Network came around. Martin Yan and Jacque Pepin were particularly huge influences for him. Martin made him want to get his first wok, and he got his first food dehydrator at 10 to follow Jacque's lead. Ryan's parents owned a restaurant which really sparked the flame in his cooking career. "I was always in charge of cooking for my brother and sister while my parents were at work," he noted. "I remember making this dish, a tuna cheese quesadilla with chili and cheddar cheese on top. I know it sounds disgusting, and it was, but my brother still makes it today!"

Moving on up, Ryan cooked throughout junior high, high school, and started at the California Culinary Academy in San Francisco three weeks after graduating high school. From there, Ryan got bitten by the TV bug and joined season 4 of Top Chef, which he referred to as a "life altering experience." Ryan got through halfway of the season and was taken off during the tailgate experience, to which he advises never poach pears on a grill in Chicago! "You go from being known in your home town to being known everywhere in the US," he said. "It is truly up to you to do what you want to do with Top Chef. You can run with it and do something good in your community, or you can just have your 5 seconds of fame."

Ryan has been incorporating alcohol into his cooking in various ways. He puts spirits in chili, soups, braises and especially desserts. "I love to experiment, that's why I throw alcohol into the mix," he said. "Jagermeister and rum add a wonderful zing to cookies!"

Ryan also incorporates beer and ales into his cooking and uses varieties from local brewers. "Beer and ales are wonderful as they help to break down the proteins, making meat more tender," Ryan said. "Pale ales add an extra spiciness to lamb and beef dishes, while darker ales add a sweetness to stews." He enjoys using spirits like Jagermesiter with braised lamb and pairing it with anise in stews, and throwing rum into Jamican Jerks as well.

For Ryan, cooking and experimenting is his life's passion and he is so glad to have expanded his culinary repertoire into spirits. "I love to simply let the alcohol shine through and not let it get mixed up with a bunch of flavors."