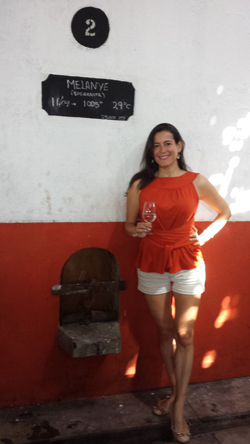 Pisco shone this year at the Manhattan Cocktail Classic. Kicking off the festivities with a tasting at Pio Pio Hell's Kitchen with Peruvian dignitaries on Wednesday, May 7th a PiscoIsPeru bar at the Industry Invitational on Saturday and a seminar on Sunday afternoon about craft Piscos, the Peruvian spirit had a presence in a big way this year. Macchu Pisco was represented throughout the MCC with cocktails and education. Sara from BarNoneDrinks spoke to Melanie Asher, the CEO, Founder, Master Distiller and Blender at Macchu Pisco, a company that produces super premium Piscos and is at the forefront of the world of Pisco.

SG: How did you get interested in Pisco? Growing up in Peru, was Pisco a big part of your life?

MA: I became interested in Pisco during one of my return trips to Peru after my mom, sister and I moved to the US. It was very important to our mom that we stay in touch with our heritage so every school break we would return to Peru to spend time with our family. It was during one of these trips that I noticed that just as important as the food was that united us around dinner tables - Pisco and specifically the Pisco Sour was. Eventually as I grew older, I wondered why despite Pisco existing in Peru for 400 years, it remained relatively unknown to others. I embraced the challenge, came up with the best recipe, and embarked on distilling it. Today, I am the only woman distiller to have founded a Pisco export business.

SG: When people try your Pisco, what should really stand out?

MA: The crispness of all our Piscos. I strive for this and have uniquely employed the artisanal technique of pressing by gravity, which makes Macchu, La Diablada and Nusta all single grape-pressed.

SG: How is it splitting your time between Peru and Maryland?

MA: It can be exhausting but most definitely rewarding. My sister jokes that I live out of a suitcase since I spend so much time between the two places. I distill in the Southern region of Peru, 4 hours south of Lima in a town called Chincha. I must be there during our vendimia (i.e. harvest time) since Peru requires that by law one must begin the Pisco production with fresh grape must. This begins at the end of February/start of March and I will remain there through May continuously tasting the product as we only work with the heart of the distillate. I will then have a 3-month rest period as this is the minimum amount of time of resting before you can really start seeing the essence of the distillate emerge. I then return back to Peru in August often through October since I guard over each of our grape distillates as if they were newborns (or so I've been told). I like to see their evolution in order to know when I will be able to blend them and thus create our La Diablada Pisco which is the only vintage Pisco in the world.

SG: You have quite an education. Do you find yourself applying your investment banking skills to your work?

MA: All the time! An MBA from Harvard certainly counts, but what is equally important is the constant feedback that my friends from school share with us to continue to improve the company. As for my investment banking days at Citigroup in Wall Street, I worked on M&A (mergers and acquisition) deals, some of the most rigorous in the beverage industry, which helped me know the financial ins-and-outs of a spirits company. This has been quite helpful in keeping our company viable and productive. However, despite all of this, I have learned that my intuition remains my best guide.

SG: What is it like to work with your sister?

MA: I could not make it without her. We are infinitely lucky that we are each other's best friend so we know we have each other's best interest at heart no matter how much we disagree on subjects. We can have open and difficult discussions which are always tempered by the fact that we each understand the other one's strength and know to respect each of our areas of expertise. She is, after all, a Harvard JD!

SG: You have been recognized as Peruvian Woman of the Year in Business - what does this mean to you?

MA: I appreciate the honor of being recognized, but I do not allow this to distract me from the work ahead. A lot of people depend on us for their livelihood back in Peru, which is in itself a tremendous responsibility to carry. If awards help keep us in business, all the better to have them.

SG: What gives you the most joy about your work?

MA: When someone tells me they visited a bar or restaurant and Macchu Pisco or La Diablada was being offered!!! Pisco is unlike all other categories out there - before we can even talk about our brands, we must first educate about what Pisco itself is. So, if bars and restaurants are embracing our brands, it just feels like a homerun!

SG: Why should people get to know Pisco?

MA: Pisco is made from the noblest of raw materials, grapes, and this is why it inspired the most famous cocktail of the Gold Rush era in San Francisco, the Pisco Punch. Pisco is a sumptuous alternative to vodka which provides no identifiable taste or aroma to cocktails and to Tequila whose agave packs a wallop both in the mouth and nose. Pisco sits in between both of these extremes providing discerning drinkers with various alternatives for their palette and nose depending on the grapes used for the Pisco - and even better, this is what makes cocktailing with Pisco so much fun!

SG: What is most challenging about your job? Most important?

MA: Being a young woman in an industry dominated by older men was initially far more challenging than I could have imagined. Over the years, I've gotten used to being the sole woman in boardrooms and other meetings amongst distillers and master blenders. I guess I have to thank my mom for raising us as tomboys! As for most important, my family has a long history of social activism and maintaining a balance between being a business venture and supporting the women entrepreneurs with whom we work whether as crop pickers or women farmers and paying fair wages - that is paramount for how we operate and "fair trade" principles are at the base of our company ethos.

SG: What's something we shouldn't know about you but you'll tell anyway?

MA: During distillation, I turn into a couch potato! I literally sit on my couch by the copper pot still for 16 hours at a go, sometimes watching up to 4 telenovelas during the night shift. Next to the still is where I spend all of my time once we start distilling. Each distillation of 1500 liters of must takes 8 hours and we have 3 shifts. It's a time of the year I don't get much sleep as making great Pisco requires a lot of patience. The steam of Pisco coming off the still is referred to as the "chorro" and mine is very thin. I temper the temperature of the gas so it is not blasting.

SG: What is your go-to drink?

MA: The Pisco Sour, of course! I think that every alcohol gives you a different buzz and there is something special about a Pisco sour that just makes you really happy. And, there is the added bonus of protein in your drink with egg whites!