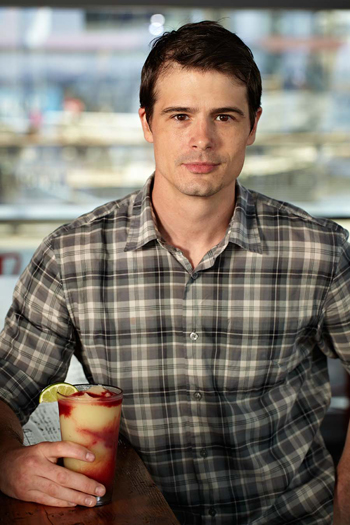 Sara recently spoke with Jeremy Strawn (head mixologist) and Charles Hardwick (head bartender) of Lazy Point, a Montauk-inspired bar in Manhattan. Lazy Point officially opened in late March, and highlights coastal cocktails in a beachy bar (in the middle of New York City). Read on to learn more about the special duo, their unique bar and how the Montauk lifestyle inspires them.

SG: So gentlemen, tell me a little about you.

JS: I grew up in Texas on a farm, playing baseball and tennis. I went to college at Texas Tech University where I studied philosophy. Then, I moved to New York and with my newfound knowledge of philosophy I was destined to sell roses on the freeway or be a really good bartender.

CH: I was born and raised in New York City and my bartending career has spanned two decades, through the cocktail dark ages in the early 90's up until the current cocktail renaissance. Bartending has afforded me many incredible opportunities, but by far the most valuable thing I have gotten from it is the diversity of weird, beautiful and generous people I have worked alongside over the years.

SG: Speaking of, I heard there is a weirdly beautiful experience of how you met...dating twins? How'd that go? Did your relationship outlast those relationships?

JS: Back when I was opening Mulberry Project, a cocktail bar on Mulberry Street, the girl I was seeing was hanging out at the bar and said her sister was coming by with the guy she was dating. [My girl] said he was a really good bartender, so I better be on my game.  So then Charles walks in and needless to say we got along just fine.  And in my case, yes Charles and my friendship outlasted that relationship.

SG: Tell me about the bar. What makes it special?

JS: Lazy Point, the town, is an unspoiled place few people know about. Its natural beauty is unsurpassed and its authentic coastal aesthetic is something that's stayed with me since I visited with Lazy Point's manager Jason, who is from there. As far as Lazy Point the bar, we've tried to not only capture the essence of the place, but bring with us the authenticity that we felt the place represented. Our laid back coastal aesthetic is something we felt would resonate with stressed out New Yorkers! 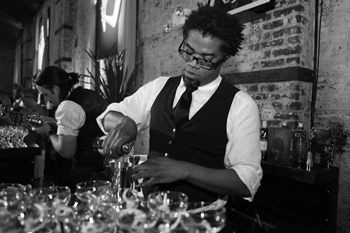 SG: How were you inspired by Eastern LI/Montauk?

JS: Going out to Montauk the first time, I was struck by how vastly different it is from the rest of New York, especially New York City. The vibe is completely relaxed, and I was fortunate enough to go with people who showed me the real East End - none of which included nightclubs and fancy restaurants.

SG: Would you consider yourself old Montauk or new Montauk? (If you don't know what this means you're new Montauk!)

JS: I myself am definitely new to the area, so new Montauk - but the ideals I hold and way I approach each visit is definitely old Montauk. The manager, Jason LaGarenne is actually a Montauk native, and he assures me I'm a local by proxy.

SG: Why the name Lazy Point? Do either of you have a connection to the place?

JS: The manager Jason is from Lazy Point. While I was out there with him, we went clamming together and were so struck by the raw beauty of the place. It inspired us to name our bar after it.

SG: What is your favorite drink?

CH: Depends on the setting and time of year but definitely one of them is the El Diablo. Tequila based, with Ginger Beer, and Creme de Cassis.

JS: At Lazy Point, I like the Rusty Cage, a new aged old fashion.  But, really my favorite drinks is shots with Jason, Gunther Bilali (owner of Lazy Point) and Charles. Shots with the Lazy Point team are what I've consumed most at the bar.

CH: I like the Pistachio Mule for the same reasons I enjoy the El Diablo. It's refreshing, fizzy and flavorful.

SG: What do you want people to walk away from your bar saying?

JS: What they say is less important to me than how they feel. I want them to feel as though they've had a genuinely good time. That sounds simple enough, but so much is contrived nowadays, it's difficult to find a place where people are truly comfortable and shown true hospitality. We are looking to make that happen for them.