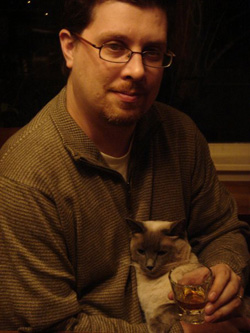 Portland is quickly making a name for itself on the cocktail scene, and that is many thanks to bartender extraordinare, Lance Mayhew. Named as one of America's "Ten Trendsetting Mixologists in 2008" by Beverage Network, Lance tends the bar at Beaker & Flask and Branch Whiskey Bar, two of the hottest spots in Portland.

For Lance, working at those two bars is a real treat. "At Beaker, (on Tuesday and Wednesday nights) it's cutting edge mixology and an all-star cast," he noted. "At Branch, (a bit more sporadically) I like the focus on whiskies and the relaxed, friendly atmosphere."

Lance has been bartending for the last 15 years and has also been spotted behind the bar at Meriwethers Restaurant and 50 Plates Restaurant. Lance started his craft when he lost his place in the kitchen. When he showed up for a new job and the cooks position he had been hired for was filled, he lied and said he knew how to bartend. "I assured him that I could, even though this place had both soda and liquor guns and I didn't know how to use either one; I just pushed a button and hoped for the best," he joked. "I'm sure margaritas went out with scotch and daiquiris had bourbon. I remember a lot of drinks coming back from the dining room and I played it off like I had used a different liquor gun. Then I got an order for a strawberry daiquiri and that's when I got exposed as a fraud. The manager looked at me kind of funny, but he liked my gumption and showed me how to make a daiquiri and taught me a new drink every day for the first three months. The rest is history."

And cocktail history is what Lance makes in his community, from concocting new drinks to infusing syrups. These days, he is particularly excited about working with whiskey, especially mixing with great ryes and bourbons. Lance can also be found writing away at his site My Life on the Rocks and as the whiskey contributor at About.com.

Lance finds cocktail inspiration from his early mentors. "Murray Stenson (Zig Zag Cafe in Seattle) is the greatest living bartender in America," he praised, noting the humbling experience of meeting Murray. "He's the nicest, hardest working and most knowledgable bartender I've ever met. Absolutely no ego to the man." Other greats that Lance looks up to are Richard DellaPenna and Moose Morante (of Torch Club in Sacramento), who Lance identified as old school bartenders who taught him about bartending, but more importantly about life. "Both men are no longer with us, but I still think about those guys every day," he said. "Moose's bar was a no-nonsense blues bar where you are lucky to get your shot of bourbon in a clean glass. He was the toughest guy I ever met, I once watched him knock a guys front teeth out for trying to steal a tip off the bar. Once you got to know him though, he was one of the kindest, most caring people you could ever hope to meet and he took me under his wing and taught me more about bartending than anyone else. Richard was a long time bartender who really taught me that to be a good bartender, you have to commit yourself to exceeding each guests expectation each and every time."

Judging by the buzz out of Portland and the raves from customers, it sounds like Lance has surely met the goal of exceeding expectations every time. Keep up the great work, Lance!

Looking for a delicious cocktail to impress with? Try Lance's "Swafford," which he created for a friend at 50 Plates:

Swafford Chill and serve up.