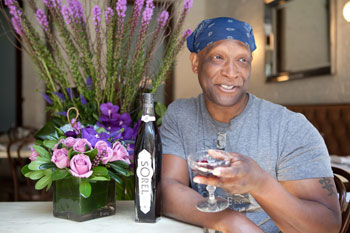 While everyone has a great story, few in the industry have one so inspirational as that of Jackie Summers, aka Jack from Brooklyn. As founder of Jack from Brooklyn Inc and the creator of Sorel Liqueur, Jack has an interesting story that is worth telling. Read on to find out about this interesting character who has cheated death and believes in positivity.

So Jack, how did you wind up in this industry?

Accident. I was making a traditional Caribbean beverage called sorrel at home for family and friends, with no aspirations to join the liquor industry. A cancer scare in 2010 convinced me I should follow my life-long dream of day-drinking professionally.

You have quite an inspirational story - and you always seem very positive. How do you stay that way, and what advice would you give others who might not be so upbeat?

Staying upbeat is easy; it's all a matter of perspective. I came as close to death without actually dying as possible. It forced me to come to terms with my own mortality. No matter how bad your problems seem, the worst day of your life is probably better than the best day of your death.

Who has been your rock through tougher times?

My mom tells me every day; anything worth having is worth fighting for. She's 87 and still full of piss and vinegar.

What was the defining moment when you realized that you needed to make Sorel?

Not sure I can identify that, but I can tell you with all certainty the moment I knew I had to leave corporate America for good. It was a week after my life-saving surgery. I'd just returned to my job as Director of Production and New Media at a glitzy fashion magazine. On my first day back, I got into a four-hour argument with the photo director over the cover of the most recent issue. She insisted the pinks on the cover of the magazine were "too pink, and the grass wasn't green enough." It was an epiphany. I wasn't sure why I lived, but I was DAMNED SURE it wasn't to argue about if the pinks were pink enough.

How should we drink Sorel?

With friends. Sorel is all about human interaction, so whenever possible, don't drink alone.

How has the industry received Sorel?

Sorel has received an astounding amount of critical acclaim. 5 stars from F. Paul Pacult, America's foremost spirits authority, 5+ from Simon Difford, his European counterpart, 94 points and runner up in the 2014 Ultimate Spirits competition. It's all quite humbling considering I perfected the recipe in my kitchen, having no previous experience.

You called yourself a blender, and that you "rectify alcohol." Explain.

There's a lot of discussion lately about what "craft" is, and is not. This is because many companies are deceitful about the part they play about what goes into their bottles.  I always want to be perfectly honest about what I do: I do NOT distill alcohol. I make a liqueur which is a proprietary blend of botanicals and neutral grain alcohol, which I purchase. It's hand- crafted, all natural ingredients, and kosher certified. My talent is in using neutral grain like a canvas, and painting with botanicals.

Where do you see Sorel in five years?

I would like for Sorel to become a permanent part of the culinary firmament. No self-respecting bar-home or professional-should ever be without Sorel.

A word to describe Sorel.

A word to describe you.

Polymath. Or crazy, they're practically synonymous.

What's something that we shouldn't know but you'll tell anyway?

My company isn't called Jack From Brooklyn because I'm a raging egomaniac. I was writing a blog about my dating life-called "Fucking In Brooklyn" under the name Jack From Brooklyn. The blog was receiving a half million page views a year at its peak, and not making a dime. When it came time to launch the liquor brand, it seemed natural to monetize my gigantic social media following: I assumed-correctly-that people who liked reading about fucking, would like drinking too.