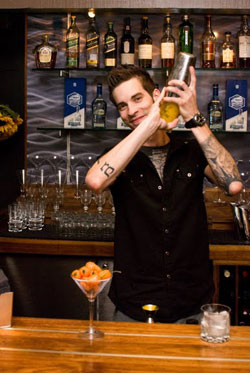 And you thought your date book was full this holiday season... Daniel De Oliveira redefines the word "busy" with his hectic schedule that sends him all around Chicago every night of the week!

Daniel, who formerly consulted and defined the cocktail program at the BOKA restaurant group (which owns BOKA, Landmark and Perennial), left in 2009 after 3 years to change things up. "I had brought their cocktail program from nothing to something and I'm very proud of the work I've done there, but it was time to move on," he said. "My good friend and fellow mixologist Ben Schiller was looking for a change, the timing was right. I left BOKA, put Ben in my place, everybody wins. I love it when it all works out for the best."

These days, things are going great for Daniel. He started his own consulting company called High Proof Chicago, where he works on everything from menus to education to corporate/private events. Daniel also currently works two nights a week at Mercadito (which he opened up in 2009) and two nights a week at the Crimson Lounge. Along with fellow mixologist Todd Appel, Daniel is recreating the cocktail scene at Crimson. "We are turning out some great cocktails in a nightclub environment, proving you can have a fresh cocktail program at a high volume pace," he said. Not to skip a night, Daniel tends bar on Mondays at Pops for Champagne, co-hosting an industry night with Colleen Healy where different chefs and mixologists bartend each week.

Daniel has been tending bar for 7 years, seriously for about four. He knew he loved the service industry, but didn't want to take the route of a waiter or manager. "When I got behind the bar, it just felt right... I could be myself and be creative," he noted. He started locally in his neighborhood, then moved to Nacional 27 where famed mixologist Adam Seger took him under wing. Daniel worked with Adam for about three years, then left for BOKA where he revolutionized their cocktail philosophy. "They had no cocktail program, no list, no nothing," he said. "It was a blank canvas for me to work with, and was one of the best learning experiences I've ever had."

Behind the bar, Daniel loves to work with the basics, like fresh citrus. He can't live without his citrus hand press because without it he can't make fresh drinks right in front of his patrons. He asserted that the juice tastes much better when it goes from the fruit to glass in minutes. Lately he has been experimenting with syrups, anything from plum to pineapple to blueberry mint. His philosophy? "Keep it fun, keep it fresh and keep it simple."

Simply put, Daniel is a fantastic bartender with a great look! His favorite cocktail to make would be his "Albany Park" that he named after his neighborhood, which has won him competitions and a sponsorship to Tales of the Cocktail in 2009. We will be looking for your name in 2010, Daniel!

Muddle kiwi in a mixing glass,combine all other ingredients except biters and shake. Strain over crushed ice and dash with Angostura on top.