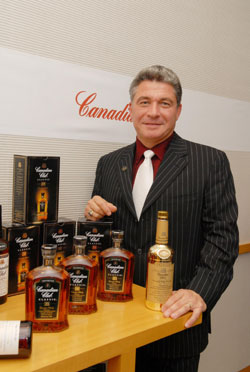 Does it seem like whisky is everywhere these days? Maybe it has something to do with Dan Tullio, the Director of Canadian Club and fondly known by many as "The Godfather of Whisky."

Dan started with Canadian Club family brands almost 30 years ago and currently represents them as the key point of contact in markets across the US, Canada and the Far East. "When I'm not on the road or in a plane, I can be found working with our various brands at the Canadian Club Distillery in Ontario, Canada," Dan said.

Dan got involved with CC after graduating college. He was initially hired as a computer programmer, but found his true calling pretty quickly. "Because of my type of personality, I wanted to explore more stimulating work within the company and transferred into Marketing and Sales. Since then, I've never looked back."

On any typical day, Dan is traveling across the United States. He might also be in Canada or on an annual trip to Japan, South Korea or Australia. At the distillery, he hosts tours for VIPs from around the world. He finds the most interesting part of his job to be telling his brand's story. "I love relaying Canadian Club's rich history, unique manufacturing process, as well as explaining the differences between the different marquees within our portfolio to the various consumers and industry leaders I meet," Dan said. "It's also rewarding to learn about the fond stories others have about enjoying CC with their friends and family."

Over time, Dan has noticed an overwhelming resurgence in CC's "cool" factor. "When I watch Mad Men's Don Draper with a delicious CC cocktail in hand and a bottle of CC on his desk, it makes me proud of the hard work that my colleagues have put behind this brand," Dan noted. "Not to mention, CC is the only spirit's brand on HBO's newest series prohibition drama, Boardwalk Empire. There's an inherent truth behind the accuracy of the show: Canadian Club quenched the thirst of many Americans during the dry years of American prohibition."

Dan's favorite cocktail with Canadian Club depends on the season. "As temperatures drop and the weather gets colder, I savor the taste of a Millionaire's Manhattan. The viscosity of CC's Classic 12 year marries well with the sherry; the taste is pure elegance!" 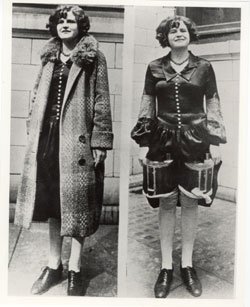 Dan's passion, pride and appreciation for his brand have made him internationally known. But at the heart of it all, he is just excited to be where he is today. "I'm truly honored to represent a brand that has been, and continues to be, an icon in the whisky industry."