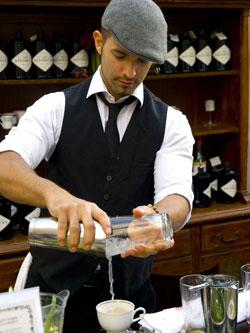 New York City is home to some of the country's most amazing bartenders. You can spot them in establishments from the depths of Brooklyn to Long Island City to Harlem, just waiting to create a fabulous drink for you. One of those amazing bartenders you must visit is Brent Lamberti, who wears many hats in the New York area.

From Wednesday-Saturday night, Brent can be found behind the bar at RdV, a lounge in Manhattan's popular MeatPacking District. RdV, aka Rendevous, is a Euro-style lounge located beneath Bagatelle, a French restaurant. Only the hip, upscale clientele will get through the selective door policy, leading into an old-world bar with dramatic decor and a DJ that plays eclectic music.

Brent plays different parts at RdV, including part bartender and part entertainer. "What I like most about working at RdV are my co-workers, from management down to bathroom attendants.  It's a great staff and we're all treated with respect."

Celebrating his 10th year behind the bar this year, Brent is thrilled to have worked in the industry doing what he loves. Brent began his journey in bartending while he was attending New York University. "I needed money and it seemed fun and exciting," he said. "A friend of mine knew a bar owner and introduced us. 10 years later I'm still having fun...and making money!"

Brent also currently works as the relief bartender at the Corner Bistro, a famous West Village bar that serves what he calls "some of the city's best burgers." Brent also spreads the love with Contemporary Cocktails, a renowned cocktail consultation and education company that reaches well beyond New York City.

Brent has created many delicious cocktails in his decade behind the bar. He said that while cocktails come and go, the classics hold a place in his heart. "Without their solid foundation, we wouldn't be where we are at this stage in the game." He was especially excited about one of the cocktails he created for this past year's holiday season: 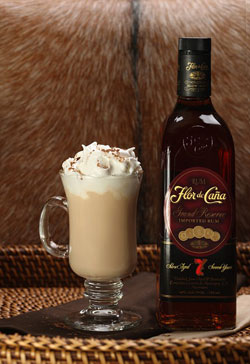 Pour the rum, chocolate liqueur and milk into a small pot, and add the slice of chili, cinnamon and sugar. Simmer on low to medium heat until hot. Pour the Hot Chocolate into an Irish coffee mug, add topping of Absinthe-marshmallow foam. Garnish with grated pistachios.

Brent is perfecting his craft behind the bar and enjoying every moment of it. He respects his staff and all the working parts that go into making a great experience for his patrons. What can't he live without behind the bar? "My barback because I hate cutting lemons and limes!" The thing that Brent uses and the favorite ingredient that he enjoys working with? "My imagination."