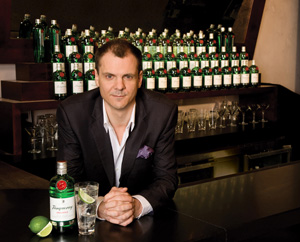 Angus Winchester is the global ambassador for Tanqueray Gin. When he isn't creating cocktails for the notorious spirit or dashing off to events, he is behind a successful consultant company called Alconomics, where he has worked with accounts like Fontainebleau in Miami, Trailer Happiness in London and the Mandarin Oriental in Hong Kong and Bangkok. Alconomics has "offices" in London and Hong Kong, and is made up of Angus, Pete Kendell and Sam Jeveons. Between the three of them, they have worked in 45 countries to date. The name Alconomics is derived from Alcohol and Economics, as well as Angus's first three initials (his full name being Angus Lewis Charles Winchester). "Alconomics was set up to do three things; help set up and create a standard syllabus for the Modern Professional Bartender, create bespoke training materials and consultancy solutions for bars and brands, and to try and show off the passion and professionalism for the Bartender," Angus said. "It's not just about doing fluffy cocktails lists or being talking heads for brands, but working on issues like Profit Enhancement for owners, accreditation for bartenders and helping translate bartender speak into corporate speak and vice versa."

When Angus has a moment to get behind a bar, he does it in style. "I alas do not manage to get behind any one bar regularly due to my extensive traveling, though my most recent posting would have been at the Nimb Bar in Copenhagen." (For those of us outside of Denmark, the Nimb Bar is located in the lavish Nimb Hotel and offers gourmet cocktails to its clientele.)

Angus has spent the last 21 years in the drinks industry. Among his most proud moments are working at Salvatore at Fifty and his work at Tailer Happiness, both in London. In the mid 90s, Angus ran a bar in Manhattan called Embassy.

Angus began his career in bartending while trying to earn some money to travel before attending Oxford University. "I carried it on during and after my degree and realized how hard it was to be good," he said. "There was so much to know and prove and it intrigued me. I don't think anyone grows up wanting to be a bartender..." And a bartender is what Angus prefers to be called, not a mixologist. "I feel there is more nobility in the term," he said. "I don't just serve cocktails but people."

Angus deeply appreciates the bartenders that have included his name in their creations. "My pride comes not in cocktails I have invented but in the drinks that people have named after me, like Brian Miller's "The Winchester," Goncarlo's "Angus& Bueser Special" and the "Winchester Swizzle" from Milk and Honey in London.

While gin is clearly a favorite of his behind the bar, Angus takes on all spirits and liquids with flavor from green chartreuse to Fernet to single malts. The most important thing that Angus uses behind the bar would be curiosity. "It drives both me and my guests to greater experiences and joy."