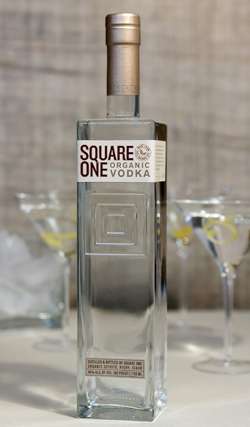 The unusually rich and smooth taste of Square One Organic Vodka is not the result of chemical flavoring or tinkering in a high-tech lab. Its appealing characteristics literally come out of the ground and the fermentation process used to make it. That’s because Square One Organic Vodka comes from organically grown American rye - not corn, potatoes, or grapes - and is born out of a certified organic fermentation process developed especially for Square One.

Organic vs. Conventional
The certified organic American rye used in Square One receives only chemical-free compost, fresh water, and tender loving care during its entire growth cycle. The natural robust health of the plants themselves is their main defense against disease and infestation. Square One Organic Vodka then takes this organic philosophy right into the distillery, using only organic yeasts and natural nutrients in a process certified by the U.S. Department of Agriculture's (USDA) National Organic Program (NOP). The only other ingredient is pure, fresh water from the pristine watershed of the nearby Teton Range.

These practices stand in sharp contrast to the production of conventional vodka. First, their raw ingredients may contain the traces of chemical fertilizers and synthetic toxins used to pump up production or artificially preserve it from natural challenges. The main agent in the fermentation, the yeast, may be the result of genetic engineering. In addition, conventional vodkas are fermented with phosphates and other chemical compounds used to control conversion of grain to alcohol. This is particularly true of some rye-based vodkas made in the U.S., which use aggressive de-foaming agents and other additives to deal with the naturally tight fiber structure of the rye grain.

As a result, Square One Organic Vodka drinkers taste the true flavor of sweet rye grown in North Dakota, one of its most favorable locations on earth. Rye is a challenging grain for bread makers as well as vodka producers because of its dense fiber structure. Nevertheless, high-grade rye remains a favorite with consumers because of its nutty, complex flavor profile as compared to corn, wheat and other grains. Square One brings rye’s rich and savory quality to the table in liquid form as never before, giving bar chefs a great new way to explore and express their artistry.

Debunking Distillation
Because of its organic origins and artisan distillation approach, Square One explodes the myth that the best vodkas are those that make the most passes through the distillation process. The fact is that distillation is used to remove impurities from vodka. Therefore, the more times it’s distilled, the more impurities it may have started with - and the less individual personality it’s left with. Square One, on the other hand, receives such a clean fermentation that it needs only a short time in a 4-column continuous-distillation process to emerge with sparkling clarity. Its unique flavor signature and cool, soft texture remain beautifully intact.

Another myth about vodka is that exotic filtration systems convey special advantages. The reality is that carbon filtering is the standard required for commercial production, and all vodkas employ it to remove fermentation solids from the final product.

What the Big Brands Don’t Want You to Knowl
In addition to organic ingredients and organic fermentation, Square One offers vodka drinkers another clean break from conventional vodka production. Square One is made entirely within a 100-foot radius of where the grain arrives at the distillery. Its gentle, artisanal distilling process was developed over more than a year of painstaking work, including equal parts organic chemistry and old-fashioned elbow grease. Furthermore, expanding production of Square One will never mean building giant plants like other corporate vodka producers. Square One is made in a small facility watched over by a master distiller, and this essential formula will not change even as demand for the product grows.

In contrast, some ubiquitous and high-end brand-name vodkas pass through multiple facilities, and even multiple states, while being assembled from pre-fermented grains or partially distilled alcohols purchased from intermediaries. No amount of clever marketing or edgy advertising can change this mass-market, cost-driven, efficiencybased approach to vodka production.