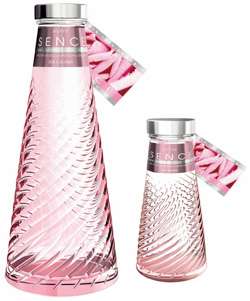 SENCE Rare European Rose Nectar is a beverage made from Kazanlak rose petals harvested during a three-week period from the end of May and early June in central Bulgaria. The concentrate of pink rose petals, natural preservative sugar and water is pasteurized at the peak of aroma and flavor, virtually the same way it has been produced for hundreds of years. Leonardo Da Vinci drank Kazanlak rose nectar from Bulgaria regularly – both hot, as a tea and chilled. This, the Silver version has 33% less sugar than the tradiional bottle.

Process Healthful Qualities The History of the Rose

From the earliest of times, people from around the world have held the rose close to their hearts. Roses existed long before humans, 35 million year old fossilized rose blossoms and hips have been found in Europe and petrified rose wreaths have been unearthed from ancient Egyptian tombs.

In Greek mythology, Aphrodite, Goddess of Love, is said to have created the rose when her tears mixed with the blood of her lover, Adonis. The Romans also adopted the rose, making it the symbol of love and beauty.When Cupid offered the rose in an attempt to bribe the God of Silence to hush Venus’ amorous escapades, the rose became a symbol of secrecy.

Master painter, scientist and inventor Leonardo da Vinci drank tea made from rose nectar regularly. In the 17th century the emergence of the perfume industry in France triggered the rapid development of rose production. Today these hardy and disease resistant plants are grown institutionally and by individuals around the globe.

The oil-yielding rose and its applications have a long and valued history in Bulgaria. Bulgarian roses were supplied to the Thracian, Greek, Roman, Byzantine andOttoman (Turkish) Empires as the finest roses produced in the known world, for achievement as well as medicinal, romantic and decorative uses.

Roses have been cultivated in the Kazanlak Valley in central Bulgaria since 1256 AD. The Kazanlak Rose, from which SENCEH is made, is considered a “very old rose” with a remarkably intense aroma and soft pink color. The Kazanlak Rose was first noted in Thracian literature. Roses from this region of Bulgaria were sought throughout the ancient world. These roses are known around the globe as the finest roses, grown with meticulous care and attention to detail. The Kazanlak Rose is used in perfume, pharmacy and food industries.

The unique Kazanlak Roses are only harvested during a three-week period at the end of May and early June. The blossoms are harvested from 3 a.m. to 10 a.m. when dew levels are at their highest. No inorganic fertilizers or unnatural pesticides are used in their cultivation. The rose petals used to make rose nectar must be converted into concentrate within two hours of harvesting. It is from these roses that experts in Bulgaria have crafted rose nectar.

In the Middle East and Balkan regions, the harvesting and production of rose nectar is a time-honored tradition. Rose nectar has been a staple in the diets of millions of people for more than 2,500 years. A drink that is light pink in color, rose nectar mixes well with some other juice products, carbonated and spirited beverages, including vodka, tequila, cognac, rum, gin, sake, champagne and some cordials. Because of its healthful qualities, it is a favorite drink at health spas and treatment facilities throughout the Middle East and Balkan region of Eastern Europe. It is considered an elixir in Japan and Korea, where it began being distributed in 2003 and 2004, respectively.

In 2002, rose nectar first became available commercially while maintaining traditional processing methods. The producer of SENCEH is the only facility in the world currently able to manage the intricate and time-sensitive process of harvesting, conversion to concentrate and production of the high-quality nectar product available on the market today.