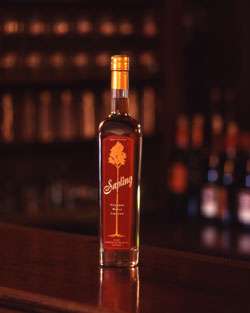 Go ahead and indulge. Taste Sapling maple liqueur and enjoy a drink that is rich and full-bodied to appeal to all palates. The liqueur pours forth from a slim and lean bottle and inside you will find a liqueur that is slightly sweetened with the distinct taste of maple sugar.

With just one taste, you will want more and Sapling Liqueur comes just in time for serving your guests during this holiday season. For those who may not have heard about Sapling Maple Liqueur before it is one of the newest alcoholic beverages that is brewed and bottled in the Saxtons River valley in Vermont.

Vermont resident Christian Stromberg is the man behind Sapling Maple liqueur but the technique of adding flavors to liqueurs to create a unique taste is something that he has inherited from his ancestors. "My family brought the tradition of making liqueurs with them when they fled Czarist controlled Lithuania in 1906," Christian said. He added that the desire of flavoring spirits was really born out of the need to improve the taste of alcohol. "Raw alcohol is not pleasant, and old distillation methods would not have produced particularly high quality spirits."

Christian’s inspiration for making maple liqueur came from the Krupnikas, a traditional liqueur from Lithuania which is flavored with honey. Based on the liqueur's popularity with friends and family here in the US, Christian decided to experiment with maple liqueur, striking a balance with the maple taste, its sweetness and strength.

Christian would not say for exact what goes in to brewing this liqueur, rather he chooses to keep both the recipe and process a secret. What he would say though is that the process of making Sapling Liqueur has a lot to do with aging. Currently there are not too many maple based liqueurs available on the market so Sapling Maple Liqueur stands in a class by itself. Another defining quality in Sapling Maple Liqueur is that unlike other liqueurs which use glycerin as a thickening agent, Christian said that he uses a high quality 100 percent Grade-A Vermont maple syrup as the main ingredient.

“Sapling achieves its smooth thick feel from the maple syrup itself. There is a strong association of maple syrup to Vermont, and Sapling embodies the taste like no other,” Christian said.

Retailing at a price of $24.50 (current November 2007), Sapling Maple Liqueur is gaining momentum with the alcohol buying public. According to Christian “it has been only on sale for three weeks now and already sales are ramping up”. He added that a few stores have already sold out their inventory and are waiting to restock.

“There are a lot of maple aficionados here in Vermont, so I knew I had to get the taste just right.”