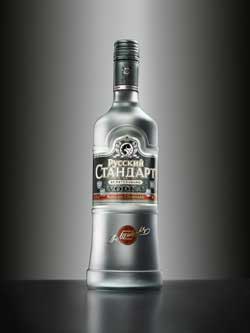 Recognized in its homeland as a benchmark for excellence, Russian Standard Original owes its name and quality to Dmitri Mendeleev's classic formula, commissioned by Tsar Alexander III for optimum balance and purity.

Its combination of traditional wheat taste - from the hardy winter wheat of the Russian steppes - and remarkable clarity - from the soft glacial waters of the frozen north - make Russian Standard Original a perfect vodka to sip neat or as your preferred spirit for a long drink. Russian Standard has come to epitomize vodka in the spirit's motherland, and in the process become an iconic symbol of modern Russian life and dynamism.

The dramatic bottle design, inspired by the Ivan the Great Bell Tower in the heart of Moscow, evokes Russia's Imperial past, and the vital role that vodka plays in Russia's most elegant traditions. Striking a balance between Russian heritage and the energy of modern life, Russian Standard Original is a masterpiece of technology, passion and craftsmanship.

This premium caliber vodka is founded in the perfect marriage of both Russia’s fabled heritage and its 21st century dynamism. Russian Standard is made with only the finest Russian ingredients, beginning with the highest grade of winter wheat grains harvested from the Black Steppes of Russia, blended with soft glacial waters from Russia’s frozen north, and then meticulously distilled in the Russian Standard state of the art $60 million distillery according to the formula for vodka established in 1894 by famed Russian scientist Dmitri Mendeleev for Russia’s Czars.