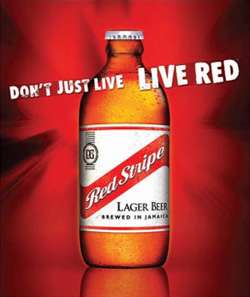 A type of Lager made in Jamaica. It is bottled in England by a company on behalf of Desnoes & Geddes in Jamaica.

Their meeting was simple enough. One morning, two youngsters came upon each other in the offices of West Indies Mineral and Table Water Company in Kingston, Jamaica. "My name is Thomas Hargreaves Geddes," said the newcomer. The other smiled. "Glad to make your acquaintance! I've been here a bit. I'm Eugene Desnoes."

And so, for the first time, Desnoes and Geddes shook hands. Neither of them could have imagined that this would mark the beginning of an extraordinary partnership. A partnership that has given the world Red Stripe Lager, The Great Jamaican Beer.

In 1927 Desnoes and Geddes announced the opening of the Surrey Brewery on Pechon Street in the heart of downtown Kingston. The first Red Stripe Beer-more like an ale, heavy and dark-was brewed a year later. The birth of Red Stripe would later be considered a milestone in Jamaican history. When the island gained independence from Britain in 1962, a columnist for The Daily Gleaner wrote "the real date of independence should have been 1928, when we established our self respect and self confidence through the production of a beer far beyond the capacity of mere Colonial dependants." The light, golden Red Stripe of today was first brewed in 1934, the creation of Paul Geddes (later Jamaica's first brewmaster) and Bill Martindale. The old Surrey Brewery on Pechon Street was phased out in 1958 when the ultra-modern plant at Hunt's Bay went into operation. This was the most modern brewery in the Caribbean.