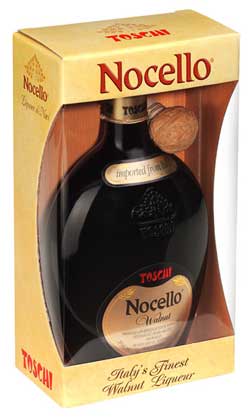 With a delicate, fragrant flavour, Nocello is a liqueur made from walnuts and hazelnuts with an alcohol content of 24% by volume. Ideal served straight, on the rocks or chilled in the freezer. A wonderful addition to espresso coffee and cappuccino, and also as an ingredient in cocktails and long drinks.

For the ancient Romans, the walnut was a portrait of the human brain. The outer husk was the scalp, the shell the protective skull, and the convoluted nut itself represented the two hemispheres of the brain. The Romans had such high regard for these nuts that they called them Jugalons Regiae or nuts of Jove in honor of their chief god. Jove was also known as Jupiter. The Romans enjoyed walnuts served as an accompaniment to fruit for dessert and claimed them as a remedy for headaches. However, historically the Romans were not the first to use these sacred nuts. Early mention of them in texts reveals that they may have been discovered some time between the existence of Babylon and Persia.

Further investigation shows that they have been used for centuries around the world. Switzerland cultivated them as a food source throughout the Stone Age and the ancient Greeks pressed them for their oil. The Chinese discovered their precious meats during the reign of Emperor Wu Ti around 100 BC and they were a well-known cooking ingredient for centuries in Kashmir, India. It has also been recorded that Native Americans have eaten black walnuts since as early as 2000 BC and use the sap from the walnut tree in their cooking. This is one old nut! Since the 4th Century in France, walnuts have been cultivated in such regions as Grenoble, which still produces the best walnuts in France and possibly the best in the world. French walnut oil remains the most highly acclaimed and irreplaceable ingredient for great salad dressings.

It is no wonder that this versatile nut is now integrated into renowned recipes across the world. In Middle Eastern victuals, especially desserts such as Baklava, walnuts are prized and widely utilized. One of Iran?s national dishes, fesenjan, is duck or chicken stew simmered with walnuts and pomegranate juice, seasoned with cardamom, and sprinkled with chopped walnuts. Bulgaria makes a walnut and cucumber soup, Soviet Georgia pounds walnuts for various sauces, while Turkey and Italy combine breadcrumbs, olive oil, butter, cream, and parsley to walnut meats for a classic cream sauce. Forget the peanut, there are one thousand and one ways to use a walnut. Whether you stuff it, chop it, press it, or mash it, you will appreciate this lovely gift from the worldâs trees. However, there may be no other way to appreciate a walnut as much as when it is made into a liqueur.

Nocello, from the Emeligia-Romagna region of Italy, reigns as the pride of Modena, Italy. It was first produced by Monasteries in the Middle Ages as a medicinal curative, but was soon recognized as a sacred treat. According to local superstition, the green walnuts must be picked on Midsummerâs Day. The time of picking is essential because of the delicate and ever-changing flavor of the nut. The walnuts must be picked and shelled delicately, then they are soaked in brown oak casks of alcohol on their shells for two years. Distillation follows the aging process, secret ingredients are added, and then the Nocello is ready.

When done properly, this long and delicate process creates a velvety chocolate-colored liqueur with hints of sweetness and a slightly bitter finish. It is also known as a digestive aid. This intelligent walnut drink affords the perfect sweet ending to meals, but is not that affordable and fairly scarce. Yet, fear not! You can find a modern version to possess a rich buttery-nut character of walnuts.