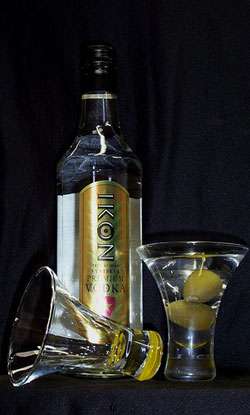 On the steep bluffs above the Vytaka River, near the medieval city of Kirov, stands the skeletal remains of an ancient monastery where Historical Chronicles claim the first production of vodka in Russia. For close to a thousand years vodka has flowed through Russian life and society. Not far from that ancient monastery, in 1862, Vladimir Vasilivitch Alexandrov built a distillery that became renowned throughout Russia and Europe for producing outstanding vodkas. Today, Ikon True Russian Vodka is made in that distillery, to the same exacting standards, Alexandrov demanded over 140 years ago. And with all outstanding vodkas, Ikon begins with nature's bounty, purity and harvest.

It should come as no surprise that the Ikon distillery is situated amongst the rich fields of a strong and vibrant farming community. For centuries this black earth has produced some of the finest wheat and rye in Russia. Come Harvest time, Andrey Pyssine, general manager of the Ikon Vodka distillery is out on the farms buying only the most select wheat and rye for his vodka. Pyssine selects his raw and essential ingredient for vodka with an expert eye. He can tell if the wheat and rye have received too little or too much sun by smell, taste and touch. Once Pyssine is satisfied of its quality the wheat is transported to the distillery.

The Ikon Vodka Distillery is not a giant corporate monolith. It is a modern, compact, complex comprising efficient and hygienic storage units, a testing lab and vodka production unit the size of a football stadium two stories high. The original façade of Alexandrov's creation still stands to greet workers and visitors. The factory although set in a rural almost unchanging part of Russia is high tech and the distillation facility was retooled with North American equipment 3 years ago. It employs a little over 200 workers comprising distillation technicians, food scientists and assembly line workers. These employees are fiercely loyal to their distillery because of its pedigree and ability to always produce award- wining vodka.

Early in the morning begins the process, which will turn the farmers' harvest into Ikon True Russian Vodka. The procedure will take close to week from start to finish. The wheat stored in a humidity controlled storage container on the distillery grounds is brought to the main manufacturing building where it is cleaned, washed and separated into giant cauldrons which will cook the wheat into an alcohol mash, the first of many steps into turning this raw material into Ikon Vodka. Now liquid, now with an alcohol strength closer to rocket fuel, it is pumped into long towering column stills where it will be continuously distilled 4 times. Ikon is now 190 proof and must be diluted with pure spring water. The distillery still taps into the ancient artesian water trapped far beneath the clean countryside above. The water source has been in continual use for centuries and the distillery lab technicians test its purity daily. Cutting the vodka with the crisp artesian water will insure the vodka has a consistent 80 proof. Near perfection but still not ready to be bottled, the vodka is filtered 4 more times through another series of giant filtration columns that contain quartz diamonds and Russian birch wood charcoal.

Upon completion, a sample of the vodka is sent to the testing lab located on the distillery grounds where it is checked for imperfections. If it passes the strict guidelines for vodka established by the Distillery and the Russian Agricultural Ministry it will be approved for bottling.

The test completed, the lab approves, and a phone call is placed to the assembly line to begin bottling Ikon. Empty, un-labelled bottles glide through the assembly line each being filled, capped and labelled while moving effortless down the conveyor belt where at the end they are hand wrapped in tissue paper and boxed for shipping. For Ikon True Russian Vodka to get to your local store or restaurant, it has been a long and steady course which has taken centuries to perfect. It may be said that vodka is a neutral spirit, but those that know vodka understand there is nothing neutral in a liquid which has taken centuries to craft, has outlived Czars, Revolutions and welcomed home democracy. So the next time, you use Ikon for your martini, remember how far it has traveled to reach you, almost a thousand years from that ancient and now silent monastery on the shores of the Viatka River.