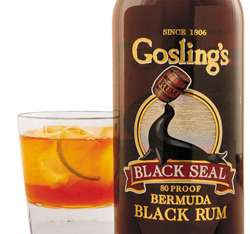 Gosling Brothers Ltd. Imported its first barrels of Caribbean rum into Bermuda in 1860. Numerous different blends were tried until one was formulated and deemed ideal.

The result was a well-aged, extremely dark rum, which the firm dubbed "Old-Rum". For over 50 years the rum was sold only by draught, with local patrons bring in their own bottles to be filled. The rum continued to be sold exclusively out of the barrel until the First World War, when the company began filling champagne bottles reclaimed from the British Officer's mess. The corks were secured in place with the use of black sealing wax, prompting people to refer to the brand as "Black Seal."