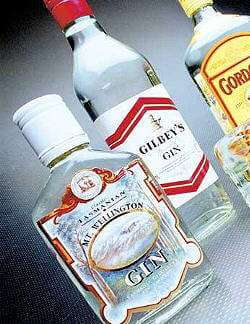 Gin: a distilled alcohol consisting of a neutral grain spirit (composition varies by maker) steeped with juniper berries and other spices and then redistilled and bottled. Gin is drinkable as soon as the second distillation is complete.

Invented in Holland by the Dutch physician Dr. Sylvius, gin was an outgrowth of a number of coincidences. The Dutch had noticed that juniper berries, the main flavoring in gin, were quite good at not only clearing up gout, but also at repelling many nasty diseases, most importantly the plague. After a while, they were using juniper berries in everything, including steeping brandy with juniper berries. Because of seasonal limitations, brandy was at times in short supply, but the Dutch were enamored with their juniper creations, and started steeping neutral grain spirits with the berries. The creation was named genever.

It wasn’t long in history before William III, also known as William of Orange, a Dutchman, ascended to the English throne. As was the custom back then, when a new king was crowned, he got to decide all sorts of things; the length of an inch*, national ‘friends’ and most importantly, the court drink. Having grown up in Holland, William chose genever, or in English, gin. Life was about to get better (well, really rather worse) for millions of Londoners.

The next few centuries were characterized by what amounted to constant intoxication by those of London’s East End. Gin became the drink of the rabble, and in unexpected fashion, was preferred by women, giving it the nicknames of Madame Gin and Mother’s Ruin. Such was the dependence of East Enders on gin that it was once mused that denying gin to the masses could lead to revolt. Gin was threatening to collapse the entire British empire, but no gin could have been even worse. The government was up against a wall, with nowhere to go; that was, until Mother Nature stepped in.

A famine later (around 1760) and gin was again a drink of the rich. With no extra grain available, the rabble couldn’t afford their elixir, and moved back to lower priced beer. Higher prices meant that respectable distillers could refine their art, and brands that we still drink today (Gordon’s, Beefeater) started up in the early 1800’s. After the change in industry, gin became a respectable drink again. It wasn’t long before it became the drink of the British military (not the navy, that was rum). The soldiers in India, being forced a daily dose of quinine in tonic, mixed their medicines with gin to kill the bitterness of the concoctions. This was the start of the gin and tonic.

Since its riches to rags to riches story, gin has continued the roller coaster ride in popularity. Along with whiskey, gin has weathered the popularity of rum, vodka and even now, tequila. It gained popularity between the wars but has since given way to vodka as the clear mixture of choice.

* The ‘rule of thumb’ refers to the fact that the length of an inch was determined at coronation to be the length of the first knuckle of the new king’s thumb.

Premium gin is still the heart and soul of a dry martini, or enjoyed in a long drink as the ever-popular gin and tonic. Vodka may be the white spirit of choice among many younger drinkers, but gin appeals as a more sophisticated drink for thirty-somethings and beyond.

WHERE DID THE NAME COME FROM

Gin is a contraction of genievre, the French word for juniper, the universal flavoring used in most gins. The darkish juniper berries come from a juniper tree, as evidenced on the label of Gordon's gin, which features the distinctive purple berries. It became known as genever or geneva in Holland and jenever in Belgium.

Gin doesn't have the most romantic of origins. It's said to have been invented by Dutch monks in the 12th century as a medicine to ward off the bubonic plague. But the real father of gin was Dutch professor of medicine Dr. Sylvius, who in the mid-1600s infused juniper berries in alcohol to produce an inexpensive medicine. (Juniper berries have a strong diuretic quality.) Dutchmen readily took to the purifying tonic developed by the good doctor, and a daily dose of genever was considered vital for good health.

WHY DID THE ENGLISH TAKE IT UP WITH SUCH GUSTO?

King William III (who was born and raised in Holland) is said to have introduced genever to England in the 17th century. Around that time, British soldiers fighting in Holland encountered genever, which they abbreviated to gin. (The term "Dutch courage" refers to soldiers fortifying themselves with the warming spirit prior to battle, much like men in bars around the world today.) Lower taxes on British spirits in the 1700s helped gin become England's national drink. At one point, gin was the same price as beer, prompting a sign outside a London pub: "Drunk for 1d. Dead drunk for 2d. Clean straw for nothing." The clean straw was where you slept off the hangover.

Around this time, British artist Hogarth painted his famous series contrasting the wholesome Beer Street with the depraved Gin Alley. Eventually, excise and taxes ensured that gin moved up the class ladder, while beer became the working man's friend. Gin was the drink of choice among British civil servants in the far-flung Empire, where the addition of quinine-laced tonic water supposedly provided protection against mosquito-borne malaria in the tropics. Meanwhile, the Royal Navy officers quaffed pink gins (gin and Angostura Bitters) as a cure-all against a variety of maladies.

HOW DID GIN BECOME POPULAR IN THE UNITED STATES?

During Prohibition, shipments of English gin (mainly Gordon's and Gilbey's) found their way into the country via Canada and fueled many an illegal knees-up. It was also around this time that the classic dry martini was developed and embraced with gusto by Jazz Agers. Illicitly distilled gin was known as 'bathtub gin' and was inherently inferior to the real thing.

WHAT ARE THE DIFFERENT STYLES OF GIN?

There're three main styles of gin. London dry is the most popular and covers well-known brands like Gordon's, Gilbey's, Tanqueray, Bombay and Beefeater. Most gins are dry, as in unsweet. Plymouth gin is associated with the British Navy and the port of Plymouth, and is a softer dry gin than its London equivalent. Genever, or Dutch, gin tends to be fuller in aroma and palate than its English counterpart, and is designed to be drunk mainly straight and chilled. Flavored gins are also popular, the making of which involves steeping various fruit in the gin (though flavor extracts are used in cheaper brands). In England, sloe gin is traditionally produced when red sloe berries, which grow on blackthorn bushes, are in season. In Belgium, I've visited jenever bars where owners stock upwards of 50 different flavored jenevers in an open chiller. These are not bars to loiter in or pass the time of day; rather, you order your favorite shot of jenever, pay for it, neck it and get on your way.

WHAT'S IT MADE FROM?

Like vodka, gin can be made from all sorts of grains, but English gin is predominantly distilled from corn. The cooked mash is fermented and later distilled in a continuous still to produce a clear, neutral spirit. Various botanicals are added for flavoring, and the spirit is distilled a second time.

Most gins are flavored with juniper berries, coriander, and one or two other botanicals that add different characters. Bombay Sapphire, on the other hand, is made with 10 different herbs and spices (added in secret proportions), which include juniper berries from Tuscany, Moroccan coriander, angelica, lemon peel, cassia bark, cubeb berries, orris root, licorice, almonds and grains of paradise from West Africa. The result is an in-yer-face bouquet and a palate as complex as any Russian novel. Bombay Sapphire may not be to everyone's taste, but real gin freaks keep a bottle in their freezer and drink it straight in a shot glass. Other gin snobs swear by the more refined palate of Beefeater or Gordon's. And the best ingredients for the perfect dry martini is a topic for endless discussion.