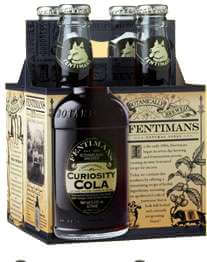 A stimulating recipe of herbal ingredients, recreating an apothecary's cola of yesteryear that is both full-bodied and curiously invigorating.

Though they prefer to call their products Botanically Brewed Beverages because they are like none other, they are classified as sodas or soft drinks. Naturally fermented, they contain less than 1/2% alcohol.

In 1905, Thomas Fentiman, an iron puddler from Cleckheaton, was approached by a fellow tradesman for a loan. A deal was struck and some security was provided - in this case a recipe for botanically brewed ginger beer. The loan was never repaid, so Thomas became the owner of a unique and rather original recipe for success.

Originally, Fentimans Botanically Brewed Beverages were delivered in stone jars called "Grey Hens" and fermentation continued through door-to-door delivery. Thanks to Thomas Fentiman's great-grandson, Eldon Robson, beautiful glass bottles have taken over the stone jars and pasteurization has given their natural sodas a longer life.

Today, every Fentimans Beverage is still made in the time-honoured tradition by brewing and fermenting herbs and milled roots over seven days. (This compares to hours' production time for typical soft drinks.) Under the watchful eyes of Thomas Fentiman's faithful prized Alsatian "Fearless", who still adorns the labels, their trademark recipes contain the unfiltered goodness of their natural ingredients. So upending the bottle before enjoying is always in order, to enjoy a fuller, more invigorating taste that is 'once tasted, never forgotten'.