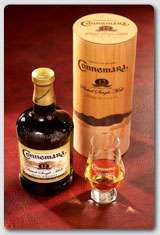 The newly released Connemara 12 Year Old is already causing a stir among whiskey connoisseurs worldwide after scooping a Gold Medal at the World Spirit Competition in San Francisco in March 2004. Reflecting the region of Connemara, this magnificent 12 Year Old revives the age-old tradition and heritage of drying malted barley over peat fires. To the smooth, balanced malt and peat flavors of Connemara Peated Single Malt is added the lingering wood aftertaste to produce a whiskey of great complexity and sophistication. Truly, Connemara 12 year old has been worth the wait.

John Teeling, Chairman of Cooley Distillery said “Our blenders and quality consultants have made us release the Connemara 12 year old. They believe that it is one of the best whiskeys in the world - bar none. It represents the pinnacle, to date, of Cooley distillation and maturing skills. The soft waters of the Cooley Hills, the warm caress of the copper pot stills, the breathing oak barrels from Kentucky, the ancient granite warehouses of Kilbeggan and 12 years in a perfect whiskey climate have combined to deliver this gem. We have very limited quantities, so savor while you can."