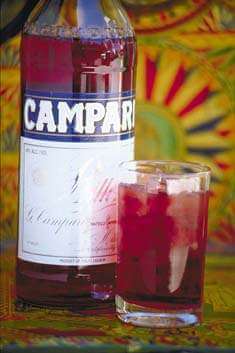 Campari was invented by Gaspare Campari between 1862 and 1867. Today the product is still composed of the same original ingredients, thanks to a formula which has remained a secret for almost 150 years. Campari is obtained from the infusion of bitter and aromatic herbs, plants and fruit in alcohol and water. Campari is produced in three factories: in Brazil, in France and in the site of Novi Ligure in Italy.

Campari is a contemporary classic. With its colour, aroma and flavour, it has always been a symbol of passion. This passion expresses itself in terms of seduction, sensuality and transgression. These are the values which have made and continue to make Campari famous worldwide.

Throughout the years, the bottle, as with all historical luxury brands, has undergone various changes, but has consistently maintained its unique identity and authenticity, which has always distinguished it. The bottle still today maintains the same key elements which have allowed it to possess a clear personality in the ever-evolving spirits segment, thereby turning towards a public of young adults of legal drinking age with its modernity. The Campari bottle and its packaging can be considered a rare example of consistency in the rapport between the product and its container. Notwithstanding evolutions in bottle and label design, recognisable character traits and aesthetics of the original have always remained firm, thus continually increasing the value of modernity linked to the brand and its appearance.

I speak to you of slow-moving summer afternoons at a sun-drenched seaside. Of lingering, lustful gazes across a small table at a raven-haired beauty whose only ambition is to while away the rest of the day -- and night -- with you in fine style.

If you're the proud protagonist of such a life, you'd live out this quintessential moment at a quiet café on the Amalfi Coast. You'd be gazing at the ink-blue Mediterranean and wooing the almond-eyed stranger with whom you don't even share a common native language. You'd be wearing some fine Italian apparel, contemplating the pasta frutti di mare and pondering some illicit post-prandial activities. You, my friend, would be living the good life. And you'd be drinking Campari and soda.

Ah, but life isn't so simple, nor generally so sublime. Italy's a lengthy transatlantic plane flight away. The Amalfi is famously overpriced and overcrowded, and your girlfriend or wife is unlikely to approve of the dark-haired stranger. Alas, what's one to do while stranded stateside and mired deep in the bogs of mind-numbing everyday life? Sure, the grass may seem greener on the other side of the pond, but the trick's to beckon forth your fantasies at every opportunity. Mankind has not yet discovered a better catalyst for harvesting dreams than the right alcoholic elixir.

Campari is just such a lyrical libation.

The ruby red spirit is actually the world's number one selling bitters, even though it's never enjoyed great popularity in the United States. Bitters is the classification of any spirit flavored with bitter herbs or roots, once believed to hold magical medicinal properties. Today there are those who say the link between bitters and health is more tenuous, but we all owe something to tradition. And if it was good enough for the sick, thirsty drunks of yore -- it's good enough for me.

One theory even has it that the term "cocktail" heralds from the 17th-century practice of plucking a cock's tail feathers to dab alcoholic bitters on sore tonsils. It must be said that bitter is not a taste most people take to right away. In fact it's the last of the four main taste sensations (the others being sweet, salty and sour) that developing tastebuds come to appreciate. Ipso facto, an appreciation for bitters is said to be a sign of the palate reaching maturity.

I didn't care for Campari when I first ordered it over ice some years ago in Santa Margherita, Italy. Never one to be a quitter, I kept at it, and the idea of drinking Campari grew on me quicker than the taste. It was intensely red, far different in flavor than anything else I drank and was the "right" thing to order before lunch in Italy. When in Rome… Before you know it, the taste has become part of the experience you enjoy. Pretentious? Perhaps. But I refuse to let some insignificant little glands on my tongue dictate my pleasures. Be the master of your domain; tell your tastebuds what they're getting and that they damned well better like it.

Gaspare Campari invented his signature spirit in Milan, Italy, in 1867, when bitters were considered of great medicinal benefit and primarily consumed as digestifs. Campari was one of the first to break out of this mold, and consumption of the stuff as an aperitif and even as a cocktail was encouraged. Europeans back then didn't generally require too much prodding to drink; thus, the idea quickly took hold.

So what's the secret mixture that comprises the neon-red glow of the generally untouched Campari bottle in your neighborhood bar? Like the Go-Go's, Campari's lips are sealed. Recipes for bitters are always carefully guarded. Campari has a Byzantine system whereby the company president is the only person in the world who knows the entire formula for mixing the 68 herbs, spices and wood barks involved. Even today, one morning each week he personally produces the concentrate with the help of eight employees, each of whom is privy to only a portion of the recipe.

Consider Campari your own personal little Italian mystery. All you really need to know is that its rich ruby-red color bespeaks its unusual stature, as does its taste. At 48 proof, it packs just the right amount of mild punch for an aperitif. Its dry, bitter flavor is easily enjoyed over ice or with soda or orange juice. Bitters are also highly thought of in some circles as hangover remedies for the morning after the night before.

So when the evocative Campari flavor sends you to some far-flung Italian seashore and languorous afternoons with an imagined stranger, remember that part of your charm and mystery, much like Campari's, are the secrets you don't share.