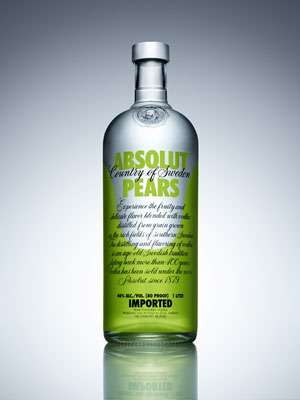 ABSOLUT PEARS has a fresh delicate taste of mellow pears and a long fruity aftertaste. As with all members of the ABSOLUT VODKA family, it is made from all natural ingredients and contains no added sugar or sweetener.

“It is always exiting to be the first to venture into a new flavor segment, as we are with ABSOLUT PEARS,” The number of vodka launches continues at the same speed it has had in the last five years, making the flavor segment the fastest growing in the US. With ABSOLUT PEARS we continue to secure our position as the leader of the segment, not only because it is the first pear flavored vodka, but because of our position as the leading premium brand in the flavored vodka segment,” says Eva Kempe-Forsberg, Vice President Marketing at V&S Absolut Spirits in Stockholm.

The ABSOLUT PEARS bottle design is elegant, with soft, subtle lines that complement the fruit. The organic pear shape is incorporated into the design and underlines the sensual personality of the fruit and the product.

In the print launch campaign for ABSOLUT PEARS, an age-old truth is being challenged in a typical ABSOLUT tongue-in-cheek tone of voice; the ad show a green snake wrapped around an ABSOLUT PEARS bottle. A pear shaped silhouette is clearly visible on the snake and the headline reads: “The New Temptation”.

“Pears are naturally more tempting than the traditional apple – they are delicate, soft and unique. Only in season for a few months of the year. Who can resist a perfect Anjou pear?” says Kempe-Forsberg.

Kempe-Forsberg continues: “There is a creative heritage within ABSOLUT VODKA that is as old as the brand itself. It was this heritage that first inspired us, in 1988, to introduce ABSOLUT CITRON at a time when no one had thought about flavored vodkas. With ABSOLUT PEARS, we continue this heritage and we have a strong launch planned where all the elements, from the bottle design, via the vodka itself, to the accompanying advertising campaign, complement each other perfectly. I am really looking forward to see the roll-out.”