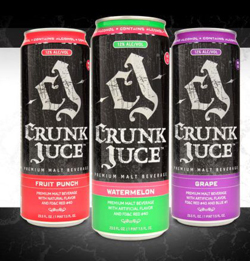 You've heard of them all. Some of you, whether you admit it or not, have been caught staring at the flashy colored cans that light up like disco balls littering the shelves of stores. But, how many of said flashy colored cans have actually undergone the ultimate test: the test of taste, wherein only one brand can be the victor and call itself superior. Until recently, there was no stand-out brand, no true champion of taste.

Enter Crunk Juce, also known as "CJ", a premium flavored malt beverage launched in 2010 by Gila Brew Co., LLC. At first glance, the fresh CJ packaging and brand message steer clear of the bright colors and rapper endorsements that the other brands have used as consumer gimmicks. Rather, CJ's new slogan, "TASTE, Come and Get Some," is a strong message that this product offers consumers a superior flavor against its competitors.

CJ is now available in three refreshingly fruity varieties: watermelon, grape and fruit punch (I've also heard the innovation team at CJ has more flavors in the works!). I had the opportunity to sit down and conduct a blind taste test for myself of all three of these distinct flavors against two rival brands: Four Loko and Tilt. We chilled all the products for the same amount of time before serving.

One of the distinguishing features among all three flavors was in the level of carbonation between the varying products. One of the products (later discovered to be Four Loko) had a noticeably larger amount of carbonation which buries any semblance of a flavor profile in the sample glasses poured. The carbonation made the nose of each product harsher as a result, too. I found samples later known to be CJ much mellower than both the competitors.

The Fruit Punch category offered three very different products, again with Four Loko falling in last place on my scale; the alcohol is the overwhelming feature in every sip. I liked the smell coming from the Tilt Fruit Punch but, to me, it tasted too much like cherry cough syrup (Robitussin, anyone?). CJ again took first place honors in the flavor category, offering that "just right" mixture of taste, smell, and alcohol content.

A few more samples of grape and watermelon later ensued and, after revealing the results of our blind taste test, I discovered that my most highly rated overall product was the CJ Watermelon malt beverage. CJ Watermelon manages to steer clear of that sticky, cough syrup-y taste associated with many flavored beverages. Instead, the product offers a smooth and refreshing taste and left no artificial taste in my mouth. When chilled, the product is easy to drink and would serve as a perfect accompaniment to an outdoor summer cookout or sports tailgate.

So there you have it. There's no more honest way to review a product than pairing it up against its competitors in a blind taste test. No crazy colors. No rappers. Just taste. CJ is building its brand as any product should aim to - by offering the best taste of any product in its beverage category. If you want to learn more about CJ Crunk Juce, you can visit the brand page on Facebook.