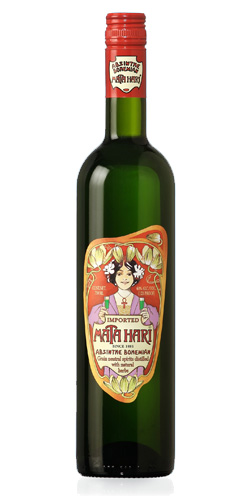 When Bar None Drinks came up with the idea to entrust me with a column of my own I knew I needed to start out with a bang.

A 120 proof bang that'll knock your socks off.

So it was an obvious choice that my first column would be about, well, absinthe.

Absinthe, that mysterious elixir best known notoriously for the Green Fairy effect, was at the peak of its popularity between the years of 1880 and 1910. However, with prohibition pushing forward in the United States and notoriety looming around the 1905 so-called 'Absinthe Murder' in Switzerland, absinthe was banned in most of the Western world.

While history is great, I'm not just going to be talking about any old absinthe (really, some of these distillates are old, absinthe goes back to the late 18th century!). Today I'd like to introduce you to a style of absinthe more appealing to consumers, Bohemian Style Absinthe. And Absinthe Mata Hari is the perfect example on a Bohemian Style Absinthe; it is characterized by its herbal palate which is less polarizing than the French style's overbearing anise profile. This muted licorice flavor makes Absinthe Mata Hari, and other Bohemian Style absinthes, more mixable in cocktails.

Ironically enough, Bohemia itself was the term used to define Eastern European territory of the Austrian Monarchy in the 19th century. But 'Bohemian' refers to more than just absinthe - it is a lifestyle. Back in absinthe's (early) prime, the Bohemian lifestyle was practiced by the unconventional, unorthodox, and carefree of the Belle Epoque in France. Van Gogh. Toulouse. You know - hippies.

There is nothing lax, however, in Absinthe Mata Hari's real absinthe recipe that spans over five family generations, dating back to its first distillation in Vienna, Austria in 1881. It even took the gold medal at the 2008 International Spirits Review Competition the first year absinthes were first allowed to be reviewed! It also has the same louche effect (the absinthe fountain ritual) of a traditional French Style absinthe. But louche lessons are reserved for a different post for a different day - too much to talk about!

The recipe is authentic in that it is made from Grande Wormwood, the key herbal ingredient that gives the absinthe its green hue and the component that got the liquor banned in the first place. But here's the myth-busting bit: it is not the wormwood itself that causes the supposed hallucinations. The chemical known as thujone has been isolated in the oil of Wormwood as the regulating substance in absinthe, but the fractions of thujone have always been - and continue to be - so minimal that they cannot cause hallucinations in the absinthes we drink.

What does set Absinthe Mata Hari apart from its French and Swiss compatriots is its mixability in cocktails. Here are a few of my favorite Mata Hari recipes that I hope you will try yourself at home:

Combine ingredients in a shaker filled with ice. Shake thoroughly and strain into a Collins glass with fresh ice.

Combine mint leaves, lime wedges, simple syrup in Collins glass and muddle. Add the remaining ingredients and tumble. Return to the Collins glass. Top with soda water and garnish with a generous sprig of fresh mint.

To learn more about Absinthe Mata Hari, visit them on the web.