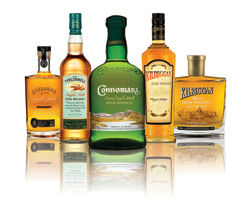 Cooley Irish Whiskeys - Inspired by tradition but grounded in the present

Sipping the Connemara Peated Single Malt, I was transported back to one of my first dates with a handsome Scotsman - a road trip through Ireland when I was a mere winsome lass (not). We climbed 9 of the 12 Beinns near Clifden in Connemara in a single day, and celebrated in a snug pub with live Irish music so sweet it brought a tear to his eye. What a way to steal a girl's heart!

Sixteen years later, that Scotsman, now my husband, has a tear in his eye for a different reason. The exquisite joy of discovering truly excellent Irish whiskey. Usually a snob when it comes to whiskeys (even claiming that it's spelled whisky), he finds the Cooley Collection far superior to other 'Irish' whiskeys on the market. Very smooth, very fine. 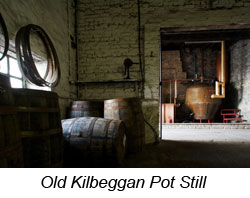 Whether peaty and sweet, like the Connemara peated single malts, Canada's biggest seller and my personal choice, or the Kilbeggan smooth blend with a malt finish, international biggest seller and hubby's personal choice, Cooley does not disappoint. The look and taste of Cooley evokes the timelessness of the Irish countryside with all the contemporary sophistication of Dublin. We take great pleasure in tasting and serving these fine Cooley Irish whiskeys that slide down the gullet without catching, coughing or spluttering, like some "Irish" whiskeys, (whose names we won't mention).

Cooley works with Scottish experts to re-create the traditional whiskeys the company now owns, like Kilbeggan and Tyrconnel. "Cooley distillery was created to produce a certain taste profile, not to adhere to perceived notion of what Irish whiskey is. This enabled us to review best practices from Ireland and Scotland and integrated these into what we do in Cooley." 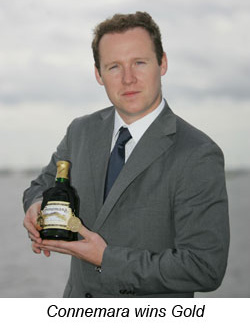 Jack imbues a culture of quality over the many brands and private labels Cooley distils, while master distiller David Hynes is responsible for the exceptional taste and quality of the whiskeys. "Private labels show the diversity of Irish whiskey and get the word out about it. The more people talk about Irish Whiskey, the better," says Jack.

But there is more to Cooley than mere buzz. Cooley has won so many international prestigious awards, it boggles the mind. The most coveted to Jack, son of Cooley founder John Teeling, is the World Distiller of the Year Award, 2008, with the recent Malt Advocate Distillery of the Year award ranking just behind it. "By focusing on quality, with the idea, if we can get that right, the rest will follow, we have managed to develop a world class reputation for our whiskey.  Now comes the challenge of getting that message across to the consumer," says Jack. "For a relatively new distillery the easiest stick to beat us with is the quality of our whiskeys. As such we have spent 20 years ensuring our whiskeys stand up against the best in the world, and I am glad to say that we can."

John Teeling opened Cooley's doors in 1987 in response to corporate smothering of handcrafted traditional Irish whiskeys by large companies. Cooley acquired some of the most famous old brands in Irish whiskey's history such as Tyrconnel, and distilleries like the Old Kilbeggan no longer in production during the previous 50 years of 'whiskey warlordism.'

With 70 employees, Cooley has an annual capacity of 250,000 9 litre cases of Single Malt and 800,000 9 litre cases of Grain whiskey with room to add extra stills as the distillery develops. "We would be ranked as a medium player but only a midget against the larger Middleton and Bushmill's operations," says Jack. Jack, 34, lives in Clontarf, Dublin, just down the road from where he grew up, which is just down the road from their Dublin offices, with his four month old daughter Alison May, and wife Katharine. A barrel filled for Alison May on her introduction to the world sits proudly in the Kilbeggan distillery for all visitors to see.

Though borne into a whiskey family, Jack topped up his marketing smarts with a Bachelor's of Commerce from Dublin U and Master's in Finance in International Marketing from Trinity College and is responsible for getting Irish whiskey into the hands of people around the world. In Canada, Cooley's is marketed through independent distributors such as Gold Medal in Calgary that supply the government and independent liquor stores, like Willow Park Wines and Spirits in Calgary. 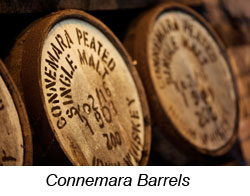 In the United States, Cooley's is distributed through New Orleans' Gemini, a subsidiary of the national distributor Sazerac, the marketing partnership made possible by Mark Brown, visionary CEO of Sazerac. "North America as a whole is a very important market for Irish Whiskey. However we are seeing a greater appreciation for our single malts in Canada at present," says Jack.

I like to think that says something about the Canadian character. It could be that we make some of the best grain whiskys in the world and single malt is synonymous to us with singular quality. However, the Grenore, made from corn, is silky as corn silk. Generally not fond of grain whiskey, Jack was more than able to convince me with the Grenore 15 year single grain whiskey. There is also a growing interest from mixologists in grain whiskeys because of its versatility and accessible taste profile. For Jack ,Tyrconnel single malt aged ten years is his personal choice as an "any time of day whiskey."

The largest challenge for Cooley is the route to market and getting focus from distributors. "Larger companies control their distribution and have the financial firepower to drive consumer awareness and trade push."

Cooley has a good collection of international online sellers like celticwhisekeyshop.com or thewhiskyexchange.com which ship to most countries around the world.

So forget green beer, it only makes you green around the gills. Celebrate St. Paddy's Day, the huge celebration and public holiday for the patron saint of the Emerald Isle, with a genuine Irish whiskey. But where is the best St. Patrick's Day party according to Jack? "It's got to be New York."

There's probably more Irish there than in Ireland too.

It's the way of the world.