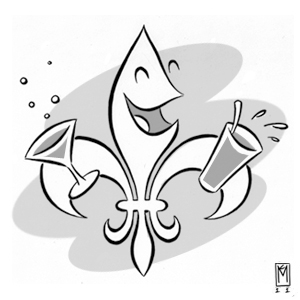 Shake in an iced cocktail shaker and strain onto fresh ice in a rocks glass. Garnish with a lemon twist.

~ from "Vintage Spirits and Forgotten Cocktails" by Ted Haigh

If you're reading this, it's quite possible you'll be attending Tales of the Cocktail this month. Unfamiliar with Tales of the Cocktail? Here's a brief description: It's a nearly weeklong event that takes place in New Orleans every year, and is considered to be the premier cocktail and spirits event in the world. Bartenders, cocktail historians, liquor brand reps, drink writers and every type of booze enthusiast imaginable invade New Orleans each July to see what's new, swap information, renew friendships, and of course, enjoy a few cocktails. The action centers around the Hotel Monteleone, a historic location smack in the middle of the city's French Quarter and home to the Carousel Bar, notable for being not only the place where the Vieux Carre cocktail (above) was created in the early part of the last century, but also for its ability to rotate.

(That's not a typo...the bar is engineered in such a way that it slowly, silently rotates, treating patrons to a gentle, almost imperceptible ride. It's essentially a merry-go-round that dispenses alcohol. I can't recommend it highly enough.)

Tales of the Cocktail has proven so popular that it has spawned a second event held in Vancouver, but the main attraction remains the shindig in New Orleans. If you've been there before, then you know what I'm talking about. If you haven't yet attended TotC (or visited New Orleans), it's difficult to describe the whole experience in words only. Even if I attempted it, there isn't enough room in this column to do it justice, so I'll refrain. However, there are a few miscellaneous thoughts, observations and suggestions I can offer up that illustrate some of the goings-on...

Thanks for drinking! (and I'll see you at Tales!)