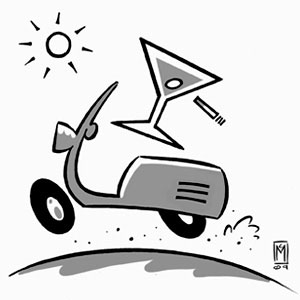 Undeniable signs of warmer days to come are turning up everywhere (assuming you live somewhere with discernible season changes). The obligatory Spring plants are determinedly knifing their way upward. Car windows are being rolled down. People are putting bandannas on dogs. But perhaps the truest signal that Winter has been fully laid to rest is that yours truly has been wearing shorts for well over a month now.

Aside from my seasonal wardrobe shift, there is one more solid indicator of warmer weather: Scooters. Virtually nonexistent from November through May in my neck of the woods, the Springtime weather brings them out from their garage-bound dormancy.

The presence of scooters where I live is a testament to perseverance, resilience, and adaptability. I applaud the folks who drive them regularly here, because my end of town isn't entirely the most conducive place for scooter-riding. It's hilly, the streets harbor many hidden hazards (our potholes can easily swallow most scooters whole) and car traffic is often unforgiving.

But the scooterists drive on. In fact, I've noticed their numbers actually increasing over the last few years. While I wouldn't go so far as to say there are lots of them, there is clearly a dedicated cadre of scooter drivers who use the little two-wheelers as their primary get-around device for local travel. Whether it's to save gas money, reduce their carbon footprint, or just for pure style, these folks obviously embrace the cult of the scooter wholeheartedly.

I can claim to have only ridden one once, many years ago...and it was hell of a lot of fun. I wholeheartedly recommend you give it a shot if you're ever presented with the opportunity. A scooter is not as daunting as motorcycle, with its fewer controls and smaller size resulting in a vehicle that's much more intuitive to drive and easier for a beginner. Plus, (and perhaps more importantly) scooters are inextricably linked to cocktail culture.

I'm not talking about the British with their ale- and amphetamine-gobbling Mods of yesteryear. It's the Italians who got this whole thing down to a science. Italy has a well-developed cocktail culture, and it's no coincidence they're who most of us think of when we hear the word "scooter". (True, many Asian countries utilize large numbers of scooters as everyday transportation, but there's a utilitarian aspect there that just seems to leech the style out of it).

Anyone who has seen an Italian film (or one set in Italy), during the 50's or 60's knows what I mean. We're talking a crisp white linen shirt, sunglasses, a rakishly dangling cigarette, and a shiny scooter. And where were these folks going on their scooters? They were zipping from cafÃƒÂ© to cafÃƒÂ©, enjoying a daily dose of caffeine to be sure, but there was plenty of cocktailing going on too. In those films, the days were always long, warm, and held the potential for romance...delivered stylishly on a scooter and holding the perfect drink.

Build over ice in rocks glass and stir. Garnish with a lemon twist.