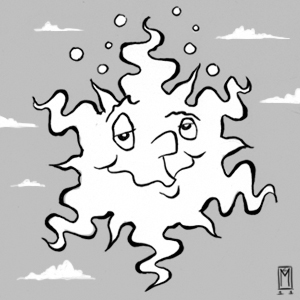 Three Dots and a Dash

Shake everything with ice and strain into a tall glass or tiki mug filled with crushed ice. Garnish with three cherries speared on a pineapple stick...or make up something equally stylish.

I love the smell of Tequila in the morning.

Yes, I'm paraphrasing an oft-repeated (and oft-abused) movie line. But it accurately reflects one of my strongly-held beliefs: Drinking during the daytime is always superior to drinking at night. Nocturnal tippling obviously has its charms too, but for my money nothing beats day-drinking.

Maybe it's the knowledge that you're knocking back a few while most other people are at work. Maybe the sensation of sunlight on your skin enhances the glow you're already getting from whatever beverage you have in hand. Or maybe it's simply the whiff of the forbidden that supplies that extra thrill...the idea that you're doing something you're just kinda not supposed to be doing.

Regardless, enjoying a cocktail or two while Old Sol toils overhead is a singular pleasure. If you remain unconvinced, allow me to present my evidence:

Breakfast: Starting your day with the right alcoholic beverage is a fine tradition. In fact, it's such a popular and established phenomenon that there are certain cocktails you are guaranteed to never see consumed outside of breakfast (or brunch, if you're one of those brunch people). Take the Bloody Mary. When's the last time you saw someone drinking one of those at night? Answer: You haven't. The Mimosa? That's not only strictly a daytime drink, but you'll never see anybody with one after 11 A.M. These are just two of many adult-oriented refreshers that prove day-drinking has enduring appeal.

Sporting Events: This one is so obvious that it's almost absurd to mention it. But let's remember that many sports are played during the day (even in this age of stadium lighting), and it's a given that the beer is flowing from the pre-game festivities in the parking lot until the final buzzer sounds. Why? Because booze makes sports better, and that goes double for a day game.

Weddings: Sure, people have evening weddings, but most go for the midday and afternoon slots. And if there's one thing any wedding needs, it's liquor. The weather is usually hot, people are either nervous or annoyed (or both), and the food is always late. Therefore, an open bar is the surest way to get everyone's attitudes adjusted. Even people who don't normally drink throw a couple down their neck at weddings. It's because they know that any booze consumed during the day gives you a little extra mileage over anything drunk after the sun goes down.

Boating: Again, people technically do drive boats around at night. And yes, they drink on them at night too. But we all know that the prime time for standing around on a boat with a drink in your hand is between dawn and dusk. If it wasn't, then it would mean all those hip-hop videos and cologne ads wouldn't be true. But they are, and what they prove is that people like boats because they provide the ideal environment for day-drinking. People like drinking in the daytime so much that they'll shell out huge sums of money just to get a place to do it with impunity. Don't believe me? Sit on the sidewalk and drink a bottle of Champagne. Now do the same on a boat. In the first scenario you're a weirdo with a drinking problem. In the second, you're a stylish, successful high roller. I rest my case.

Concerts: The concert may take place at night, but the tailgating stats during the day. And the majority of concert drinking happens at the tailgate. It's not just because once you go inside the venue a beer will cost you about the same as your car payment. No, it's because concert attendees know what we all know: That sunny parking lot drinking is always preferable to darkened, inside-the-venue drinking. Chalk it up to anticipation.

Yardwork: Like sporting events, this one is pretty much a no-brainer. Any drink consumed after a day of working in the yard is several magnitudes of deliciousness above one consumed almost anywhere or anytime else. Ever wonder why you don't mow your lawn at night? This is why.

Grilling/Cookouts: This is the flip side to yardwork. On the days when the weather is nice and you don't feel like defoliating your estate, you get grilling. Standing next to a grill is one of the best way to facilitate day-drinking known to man. If you're grilling, no one questions why you have a drink in your hand. Take away the grill though, and you become the neighbor who's always just standing in his yard holding a drink.*

The Local Bar: Nothing beats the vaguely illicit feeling of hunkering down at a neighborhood bar during business hours. It doesn't matter if you're retreating into a shadowy, urban shot-and-a-beer emporium or a sun-roasted beach shack. Having a pick-me-up at the local between 9 and 5 is one of life's great little indulgences, and should be savored without guilt. There's a reason bars are open during these hours, and it's not because people crave mid-afternoon mozzarella sticks.

Thanks for drinking! (and don't forget to set those alarm clocks)

*This is not problematic if you simply explain to your neighbors that you write about cocktails and are conducting research.