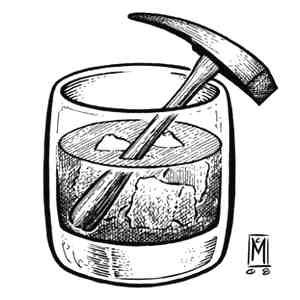 I like simple drinks. Even though I spend many nights laboring on recipes that often contain a multitude of ingredients (fans of tiki-style drinks will know what I'm talking about), I'm always intrigued by those recipes that elegantly match 2 or 3 components in flawless harmony. There's a Zen-like aspect of restraint to drinks like this, and much of their beauty lies in what isn't there, rather than what is.

The Stone Fence is one such drink. It follows the time- honored formula of spirit + mixer over ice. No frills, nothing unnecessary.

~ Adapted from "Imbibe!" By David Wondrich

But just because the drink is simple doesn't mean you don't have choices. This time of year, cider is everywhere, so you can go sweet, tart, or anything in between. Hard cider is also an option if you want to ward off the Autumn chill with an industrial-strength version. If you need incentive to check out your local farmer's markets and roadside stands, a cider safari should do the trick.

You've obviously got options with Bourbon as well. American whiskey is enjoying immense popularity, and there is a great variety of Bourbons on the shelves right now. My advice would be to simply try a few different ones and see what you prefer (My favorite brand is Bulleit, and it works wonderfully in this drink). And don't feel like you need to go the super-premium route- This is a great recipe in which to use your "everyday" Bourbon. Cider really asserts itself , so save your 20-year-old reserve for another time you can enjoy it on it's own.

Also, a quick word about ice: Use fresh, large cubes if possible. This drink is much better served by 2 or 3 big hunks rather than a handful of small stuff. This is a flavorful drink, so keep the dilution to a minimum and remember that sometimes size does matter.

Speaking of size, the recipe indicates the drink be served in a "large bar-glass", somewhere in the range of 12 to 14 ounces. Personally, I prefer a rocks glass. Using the smaller glass reduces the amount of cider involved, but I think it ends up being a more balanced drink with the Bourbon playing a bigger role in the flavor profile.

Of course, if whiskey isn't your thing you can always delve further into the drink's history. According to Wondrich, the Stone Fences being consumed in the late 1700's (as opposed to the mid-19th century version we're talking about here), were made with lusty, high-proof rum. Paired with hard cider, it's a robust tipple to be sure. If you feel like tinkering further, give some rye a shot. (In the interest of full disclosure, I feel I must confess to being a big fan of rye). Like Bourbon, rye is a natural match for apple cider, and it's trademark spiciness plays off the apple flavor tremendously.