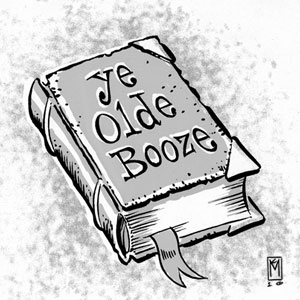 Shake everything with ice and strain into a double old-fashioned glass filled with crushed ice. Garnish with fruit and add a straw.

~ Adapted from "The Esquire Drink Book", edited by Frederic A. Birmingham

Sure, people in decades past got bombed, consumed poor-quality alcohol and drank for the wrong reasons...same as now. Bad habits are timeless. People also drank in moderation, sought out worthwhile products, and knew what appropriate occasions for imbibing were...same as now. Good habits endure too.

When I say that people drank differently, I'm talking primarily about what they drank. There are certainly other differences (for example, cocktails tended to be smaller, but that's a topic for another time), but perhaps the most striking one is how particular ingredients go in and out of vogue.

The best way to get a sense of this is to browse old bar guides and cocktail recipe books. These tomes are fascinating (assuming you're a booze nerd like me) glimpses into what people were drinking during a given time period. Depending on how fertile the flea market/thrift store scene is in your area, most cocktail guides can be had for a song, and the value of information they reveal far exceeds the buck or two you'll spend. Take a quick spin through any drink book published pre-1960 (the '60's being the time period generally considered to be when cocktail culture took a serious nosedive in terms of quality and diversity), and you'll find several things of note, ingredient-wise:

Whiskey and gin. Prior to the 1960's, people drank boatloads of each. They were by far the most popular cocktail bases of the era, and if you drank spirits (even at least semi-regularly), one of these was your weapon of choice. Nowadays, both these categories (especially gin) are enjoyed by far fewer people than during their heyday in the first half of the last century, their places of honor having been usurped by vodka and rum. Speaking of which...

Vodka. It's been the most popular base spirit since the '70's, and today outsells all others by a staggering margin. It's hard to imagine a time when the vodka juggernaut wasn't rumbling across the liquor landscape, but glance at any drink book dating from before 1950 and you'd be lucky to find one with a vodka section longer than a page or so. In those days it was viewed as a curiosity, something drunk almost exclusively by Russians (and certain Europeans), and was considered at best a novelty, and at worst, a type of old-country rotgut. How times have changed.

Tequila. Virtually nonexistent. Tequila has been a bar staple for some time now, but it's traditionally a benchwarmer. The popularity of drinks like the Margarita and Tequila Sunrise helped bring it to wider public consciousness in the '70's, but prior to that, it was rarely used in cocktails. The Esquire Drink Book (mentioned above) which was published in 1956, lists exactly three drinks in the Tequila section, which speaks volumes on Tequila's relative popularity at that time.

Rum. Like vodka, rum is a mainstay of the of the current casual drinking scene, buoyed largely by an ocean of Captain& Cokes and whatever new flavor the Wonka-esque staff at Bacardi cranked out last week. But it wasn't always so. Rum's popularity in the early part of the last century was largely limited to things like punches and toddies in sophisticated circles, and a cheap way to get high in disreputable ones. There were some delightful rum-based drinks in the cocktail canon, but it wasn't until the double whammy of prohibition repeal (and the corresponding whiskey shortage ) and the rise of the tiki restaurant craze that rum's profile increased in a significant way.

Brandy. Pre-1960, this stuff was everywhere. It was used as a secondary ingredient in a multitude of drinks, and only the most neglectful tavern owner or home bartender failed to have some handy. These days, you can often still find a stalwart bottle of Hennessy or Courvoisier at your local watering hole, but it's role is mostly limited to the occasional straight pour- It's glory days as a workhorse cocktail component have definitely passed.

Other Spirits. Too numerous to list here, but a few examples of liquor you see all over the place in old bar guides includes things like Maraschino, Chartreuse, Dubonnet, Kirsch, Lillet, Absinthe/pastis, and Benedictine (which is used in a wonderfully subtle way in the recipe above). Raspberry and apricot were popular flavors as well, and there is a surprising number of drinks that call for creme de menthe. The good news (with the exception of the creme de menthe perhaps) is that all these are still being produced and can usually be found with a little effort. Still, it's rare to see any of them behind most bars these days.

Bitters. It was once inconceivable that a bar would not have bitters on hand. Angostura, Peychaud's and your preferred brand of orange bitters were a must-have, as many drinks required them. There were a great deal of other types too, and they were used liberally by savvy bartenders. But by the '70's, they had fallen so far into disuse that the only bitters you were likely to see was the dusty bottle of Angostura that had been on your grocer's shelf since you were in kindergarten. Today there is a wonderful variety of bitters available again, but most reside in the kitchens of cocktail geeks and on the shelves of the few bars that are oriented toward classically-prepared drinks.

Nonalcoholic ingredients. Citrus ruled the day, as lemon, lime and orange juice were most commonly called for to bring some sour/acid to the mix. On the flip side (no pun intended), cream and raw eggs (yolks, whites, or both) were plentiful, while flavored sodas were scarce. Grenadine also appears with great regularity. Nowadays, citrus juice remains a go-to ingredient, but it's uncommon to find the others at-the- ready in your neighborhood joint. If it's not something that can be dispensed from a soda gun or a bottle of flavored pre-mix, you're not likely to run across it in most places.

Fortunately, if you're inclined to sample some of these older-style drinks, it can still be done. The cocktail renaissance that slowly gathered steam through the late '90's and really hit its stride over the last 5 years resulted in several extinct ingredients being resurrected. The aforementioned bitters drought has been reversed. New cocktail guides that tip their hat to classic recipes are being written. Craft cocktail and speakeasy-style bars are popping up in many places. And we can't overlook the internet, which continues to chug (or more accurately, blaze) along, linking people, places, and information together...even if it's just for the sake of a good drink.

We're probably not likely to see a widespread return to the drinking habits and preferences of earlier times, but it's nice to know that via the combination of vintage drink guides and renewed interest, we can periodically not only get a look at history, but a taste of it as well.

* I like a medium-dark Cuban rum in this one. Ron Matusalem Gran Reserva makes a richer, slightly sweeter rum-forward drink, while Havana Club Anejo Reserva brightens the mix overall and accentuates the tartness of the orange.