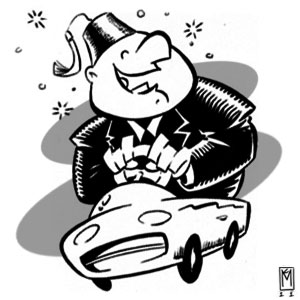 Stir well with ice and strain into cocktail glass. Garnish with lemon twist.

~ Adapted from "The Standard Bartender's Guide" by Patrick Gavin Duffy

It seems as long as people have had heads, they've been putting things on them...specifically hats. Hat styles come and go, with different ones being in vogue at various times, and it's amazing how many ways human beings have found to decorate their noggins either for function or fashion. While hat-wearing isn't quite as widespread a phenomenon as it used to be, you can still find many bold souls who proudly festoon their domes when the opportunity arises. And often these very same people aren't shy about indulging in an adult beverage.

Coincidence? I'll leave that for the cultural anthropologists to decide. What I can provide is a short guide to what a person may be drinking (and doing) based on the hat he/she is wearing. This information is based on years of intensive field study, but is by no means comprehensive. It is meant as a general reference only, and all the usual caveats apply.

Fedora/Trilby/Porkpie: The difficulty with this style of hat is determining whether the wearer is a genuine cocktail connoisseur or simply a random hipster. If he's drinking something containing rye or Chartreuse, he is a drink nerd. If he's drinking a White Russian (or anything containing vodka for that matter), he's a hipster. Note: There is a significant chance a non-hipster wearing this type of hat may be a bartender, and also have a at least one bottle of bitters on his person.

Sombrero: If you encounter anyone wearing a sombrero while drinking, that means it is either Cinco de Mayo or Spring Break. Tequila shots and/or Cement Mixers will likely be the weapon of choice, along with Coors Light, Bud Light or Miller Lite. The sombrero-wearer may also have slurred speech and missing pants.

Fez: If the person wearing the fez is under age 50, they will likely be drinking a Martini, Manhattan, whiskey on the rocks or anything served in a tiki mug. If the person is over 50, the drinks will be the same, but they may actually be a member of a secret society. Be cautious.

Baseball: Tough call. Baseball caps are ubiquitous and generally give no definitive indication of drink preference. However, a general rule of thumb is that anyone wearing a Yankees cap is a dolt, and their drinking preferences are therefore suspect.

Visor: Visor-wearers are most often found at college football tailgates, beachfront bars, and golf courses. Cheap macrobrewed beer is likely close at hand, and a bottle of Captain Morgan is not uncommon. A flask of good-quality Scotch may occasionally be tucked into a pocket of their cargo shorts.

Panama: Often also wearing a tropical shirt, this person is likely drinking a Daiquiri, Mai Tai, or Ti Punch. If you engage him in conversation, he will at some point offer to show you his personal collection of 60+ rums.

Driving: If the person wearing the driving cap is also clad in a skintight t-shirt and displaying a deep tan, exaggerated musculature and tribal tattoos, they will be drinking a vodka and Red Bull. Otherwise, see "Fedora/Trilby/Porkpie" above.

Beret: Absinthe. And keep it coming.

Cloche: Always female (unless you're at a really weird bar), the cloche-wearer will be drinking cocktails (likely gin-based) from the pre-prohibition era. This person will also have a near-encyclopedic knowledge of women aviators.

Cowboy: If worn by a male, he is most likely drinking American lager in a bottle. If worn by a female, you are at Lake Havasu and should be concerned more about being killed by drunken boaters than what the ladies are imbibing.

Laplander: Sierra Nevada Pale Ale or any beer brewed in the Pacific Northwest. This person will also be your go-to for weed and Umphrey's McGee tickets.

Cat-in-the-Hat/Jester: Whatever is best enjoyed on a chairlift.

Bucket: If the wearer is over 60, they will be enjoying one of the Olive Garden's reasonably-priced reds. If under 60, Rumple Minze straight from the bottle.

Tyrolean: Liter mugs of draft. Wearers under age 30 may also be supplementing with Jager shots. Be aware that Tyrolean hats are accompanied by accordions nearly 100% of the time.