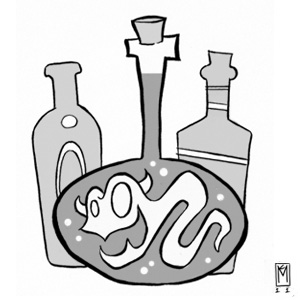 Combine ingredients in shaker and fill with ice. Shake well and strain into chilled coupe. Twist grapefruit peel over drink, rub around rim of glass and drop in to garnish.

~ by Evan Harrison and Max Toste

If you've watched any cooking shows over the last few years, you've surely noticed some programs offer up recipes using everyday "regular" ingredients we're all familiar with, while others clearly make a point of using things that are downright exotic. The contest-format shows like Iron Chef, Top Chef, Chopped, and The Next Food Network Star are notable examples, where virtually every dish presented contains at least one ingredient that may have you scrunching your face in wonderment and saying "What the hell is THAT?" (unless you're a moderately zealous foodie, in which case you probably have said item in your pantry or fridge at this very moment).

Here's the thing: Drinks have reached this point as well.

Truth be told, they've been at this point for a while. About six or seven years ago (depending on your reckoning) this little thing that's been termed the "Cocktail Renaissance" began, and bartenders, drink historians and miscellaneous booze geeks all found themselves simultaneously dredging up drink-making lore from the past and using that knowledge to fuel experimentation and set trends for the future. A small community of rabidly committed cocktail geeks coalesced, and has been spearheading the movement toward inventive cocktail-crafting ever since. New drink concepts based on a reverence for established, classic formulas of old have flourished, and this trend brings with it a need for something very important: Weird ingredients.

Just as creative chefs are perennially on the hunt for stranger and stranger food items with which to challenge their skills and their customer's palates, bartenders have joined the fray, constantly on the rove for oddball stuff to try out in cocktails. Will your corner dive, local dance club or nearby sports bar megaplex be part of this phenomenon? Probably not. But it's likely that somewhere in your town there's an earnest barkeep wondering if there's something beyond the back bar that can add some life to his or her offerings

Of course everyone's definition of "weird" is a little different. Items that look bizarre to some are sure to be staples of another's liquor cabinet. Almost every culture on the planet has some kind of indigenous booze (often more than one), and there are drink nerds everywhere looking to add them to their tool box. And it's not just limited to spirits. We can't forget all the bitters, tinctures, syrups, and infusions (both commercial and homemade), that have been pressed into service these last few years.

So what constitutes a weird cocktail ingredient? I could make a list of my personal "Top 25 Strange Things I Like To Make Drinks With", but other than for mild entertainment value, I doubt it would be much use to anyone. "Weird" varies from case to case, and depends a lot on context. For example: Whiskey is not a weird ingredient. Whiskey that's been aged in caribou skulls* is a weird ingredient. I happen to love the herbal bitter liqueur Cynar (used to wonderful effect in the recipe above), but given that almost everyone I've shown it to recoils simply because it has an artichoke displayed prominently on the label, I fear there are some precincts where it will always be regarded as a weird ingredient. It all depends on where you're standing (or on whose barstool you're sitting).

In any case, I heartily recommend seeking out and putting to use weird (whatever that means to you) ingredients. Find a bar with a reputation for creativity and ask what they've been using lately. Drop into an independently-owned liquor store and inquire if they have anything in the back or in the basement that never quite seemed to sell. Browse online liquor vendors. Hit up your local farmers' markets and hippie grocers for raw materials to make your own.

Just don't be upset if they think you're weird.

* To the best of my knowledge this does not exist. Yet.