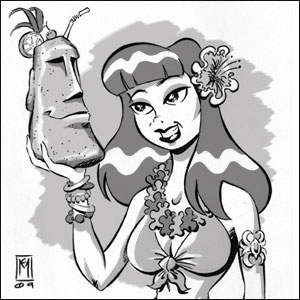 Shake everything with ice and strain into a double old-fashioned glass (or better yet, a tiki mug) filled with cracked ice. Garnish with a cherry skewered to a large mint leaf.

"But why is the rum gone???"
- Captain Jack Sparrow

However, fans of tiki drinks will glance at the above recipe and likely find themselves saying, "Okay...it's got lime juice, a nice flavored syrup, several other interesting ingredients and even citrus-based bitters. BUT WHERE IS THE RUM?

Don't fret...old Dr. B. isn't deceiving you. Granted, almost all tiki drinks contain rum. Since their inception in the 1930's, tiki drinks have centered on one spirit and one spirit alone: rum. And a fine spirit it is. No other base spirit can claim to have the diversity of styles and flavors that rum does, and that's one of the reasons it's so devilishly fun to mix with...particularly in the case of tiki drinks.

However, not all tiki drinks contain rum. A quick spin through any of Jeff "Beachbum" Berry's books (the undisputed gospel tomes of authentic tiki recipes) will reveal that the occasional rum-less concoction makes itself known.

Of course, these are often the very drinks I find so intriguing. Even though I passionately love rum, I'm fascinated by the idea of a rum-less drink that still manages to pull off that nonspecific yet "you-know- it-when-you-taste-it" combination of flavors that is unmistakably tiki. And so I go, experimenting with unorthodox ingredients trying to capture the tiki aspect but without rum as the backbone. Blasphemous? Perhaps. But the fun stuff usually is.

And if that wasn't heretical enough, I decided to include a few ingredients that would have many liquor snobs recoiling and despairing. I've heard unkind things said about both Zen and Mekhong from those in the booze nerd community, so what better incentive than to try to redeem them? And it's no secret that vodka has been the #1 target of white-hot contempt from the cocktail cognoscenti for years...so in the mix it goes. I love to go against the grain.

So there you have it: A drink I consider perfectly worthy of the tiki mantle, despite containing no rum*and including three ingredients with less-than-stellar reputations in certain circles.

Sometimes you just gotta be an outcast. Preferably on a sunny deserted island with a chilly tiki drink nearby.

**Those who can't bear the thought of a tiki drink sans rum can take comfort in the fact that Mekhong is a sugarcane-based spirit, which would technically place it in the rum category. However, its flavor profile is nothing like most rums and much closer to something like a mild whiskey. It's available in the US, though it may take a bit of effort to find. It is well worth seeking out.