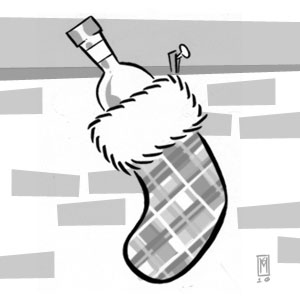 Mix vodka and orange juice in a highball or rocks glass. Add ice cubes and float cranberry juice. Serve with stirrer and a lime wedge (optional).

The end-of-year holidays can strip you of both your patience and your liquor. The reasons for loss of patience during the holidays are legion, and we're probably all familiar with what they are - No need to list them here. Booze-wise, you'll likely find your shelf looking light for at least one of three reasons. First, you may be dipping into your liquor cabinet for unopened bottles to give as gifts. Second, you may be hosting parties, which will most certainly put a dent in your supply. Third, you may have wiped out your stash on your own in an attempt to cope with everything the season brings. You could also be doing all three, in which case I both salute and pity you.

Where does that leave you? With a few motley bottles...the undesirable and the unworkable if my guesses are accurate. You've probably got too little of the good stuff, and too much of the weird stuff. When the holidays go full-throttle in mid - to late December, you'll be gazing at the sad ranks of wounded glass soldiers, cursing the casualty rate and wondering how such a once-proud platoon was decimated in appallingly short order.

This is when you call on whatever resolve you possess and realize that you are not entirely out of options. Sure, you can probably slam together a rum and Coke or even pull off a Martini (provided Aunt Flotilla didn't guzzle all the vermouth), but you've probably got the fixings for a more festive and surprisingly holiday-appropriate drink lying around too. I'm talking about the Madras.

The Madras is a holiday drink in disguise. In its bones, it's just a slight variation on the workhorse vodka and cranberry. But adding a dose of O.J. gives it some dimension and also steers it gently toward the realm of Winter drinks. It's usually knocked back on beaches and porches during months that begin with "J", but orange and cranberry are flavors so prevalent during the holidays that it's hard to believe this drink hasn't been served all along with other traditionals like egg nog and mulled something-or-other.

Thematic compatibility aside, the other great thing about the Madras is that it's only got three ingredients, and I'm willing to bet you've got two of them handy right now. If you're the kind of person who keeps juice around, the smart money says the orange kind is the one you've got in the fridge. That leaves vodka as the other Usual Suspect, and since you're the type of person who reads articles about making drinks, I'll just assume you've got some.*

What we end up with is a drink that is seasonal, can be assembled in seconds, and whose components can likely be gotten from the nearest grocery or convenience store. It's darn tasty too, and amenable to tinkering, allowing you to adjust the juice/vodka ratios however you see fit. You also can mix it in virtually any glass that's taller than it is wide, so you don't have to raid every thrift store or gourmet kitchenware emporium in town just to make a damned drink (As we've discussed earlier, it's the holidays, so that means we don't have the time, money, or patience left for any of that nonsense.)

So if you can get past the Summertime stigma that surrounds the Madras, you'll have a perfectly serviceable drink for this time of year. You might get a few funny looks from the cider-sippers, but you'll have the last laugh when they suddenly run out of cinnamon sticks.

* unless you're one of those snobs who refuses to allow vodka to cross your doorstep or your lips. If this is the case, I'm sure all your buddies in The Uptight And Pretentious Tipplers' Society applaud your discriminating palate.