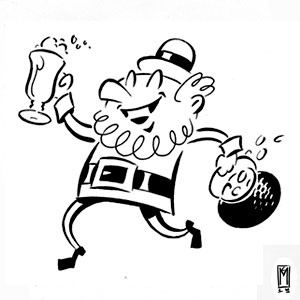 Pour whiskey, coffee and sugar into a warmed mug. Stir, then gently layer cream on top of drink. (whip the cream slightly for more texture)

~ Adapted from a recipe originally published by David Wondrich

Let's take a few minutes and talk about leprechauns. This time of year you see them all over the place. The weeks leading up to St. Patrick's Day are when all thing Irish are front and center, and that includes the little guys in green.

The origin and history of the leprechaun varies depending on the source (and frankly, it would take more space than we have here to discuss it). The important thing is recognizing when and where to spot one. There are a handful of places you'll see leprechauns, and it's easier than you think to get a glimpse of the little fellows. Of course, I'm not talking about real leprechauns, but rather their pop-culture counterparts. Those guys are everywhere.

One of the easiest places to find a leprechaun is in a bar. Mid-March is when leprechauns start showing up everywhere, but bars take the prize for sheer density. Irish-style pubs will often employ leprechaun imagery (unless they pride themselves on seriousness and authenticity) as a marketing gimmick, and it's not unusual to find paper versions plastered on walls and 3-dimensional representations nestled amongst the bottles and other knick-knacks.

However, it's the other watering holes that really get an "A" for effort. These are the joints that have no connection to Irish culture whatsoever, but every St. Patrick's Day insist on hiring a small person* to dress as a leprechaun in order to speed up alcohol sales. These tiny hype men can be seen shambling enthusiastically throughout the place, doling out shots or encouraging patrons to buy green beer. Often they're more intoxicated than the customers, which only seems to add to the merriment.

Leprechauns also frequently turn up as spokesmen for a variety of businesses and products. Most commonly used by companies with an Irish (or Irish-sounding) name, leprechauns can be seen on signs, brochures, websites, the sides of trucks, and anywhere the image of a jolly dwarf can be inserted. TV commercials provide the opportunity for animated versions, sometimes accompanied by shrill voiceovers with cringe-inducing accents. Tiny, emerald-clad men apparently generate higher sales and customer satisfaction, so who are we to judge?

One last place you'll likely see a leprechaun is anywhere gambling happens. Lotteries rely heavily on leprechauns as symbols of wealth, and consequently they're emblazoned on tickets, signage, and promotional materials. This theme extends to casinos as well, with slot machines and other automated games of chance having the whole "pot o' gold" concept as a mainstay.

Oh, there's those movies too. Depending on your taste in entertainment, you'll either love or hate them. Buyer beware.

So are leprechauns simply bits of corrupted mythology used to promote drinking, gambling, and commerce? In some cases, yes. But don't get too hung up on negative stereotypes. There's some genuine fun and goodwill surrounding those mini merrymakers. Catch one if you can.

*A popular variation is the "sexy leprechaun", in which the little person is replaced by an attractive young woman wearing a revealing version of the standard outfit. See Also: Sexy Santa, Sexy Dracula.