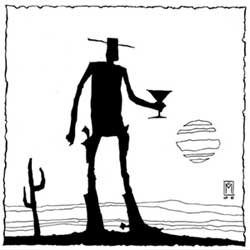 * to make honey syrup, heat equal parts honey and water in a saucepan over low heat, stirring until blended. When cool, bottle and refrigerate.

The Mr. Boston Official Bartender's Guide often takes a beating from certain segments of the cocktail community. Not in the literal sense (although there are many sticky, stained and scuffed copies floating around out there), but in terms of where it sits in the hierarchy of bar guides.

Many cocktail enthusiasts take a dim view of the Mr. Boston books. Much of this disdain is a reaction to the accuracy of the recipes. Often, many recipes in the Mr. B. books exhibit a curious break with what is considered the "traditional" recipe for a given drink. Ingredients are omitted, substituted, and in some cases, others are inexplicably added to what is otherwise a familiar, standard recipe.

A second complaint often leveled at the Mr. B. books is that they are not exhaustive. Many people turn to the guides expecting to find a recipe for a drink they enjoyed poolside in some far-flung vacation resort. Or perhaps they're attempting to find out what was in the elegant highballs they remembered their grandparents drinking at bridge games in the 50's. Maybe it's just the embarrassingly-named shooters that put and end to last week's bar crawl. Whatever the scenario, it's entirely likely the seeker may come up empty.

I think much of this criticism is unwarranted. As for the first charge, one should keep in mind that drink recipes change. Very few drinks go their entire lifespan without at least some minor alterations placed upon them. Cocktails by their nature are subject to the whims of both those serving and consuming them. Those seeking a canon of immutable recipes are doomed to disappointment- There are no graven stone tablets resting in the vault of an Ultimate Cocktail Authority.

Drinks, like many other things in life, are organic. They come, they go, and some stick around long enough to gain notice. But rarely is there a drink that can claim to have been untouched by the passage of time. Browse a stack of bar guides and you will find the same variations that the Mr, Boston books display. Expecting Mr. B. to be any different is unrealistic. Drinks evolve, and the Mr.Boston guides reflect that evolution (and perhaps better than any...I don't know of another series of bar guides that has been around as long).

As for the second charge, the Mr. Boston guide was never intended to be a comprehensive listing of every drink ever made by man throughout time. Not only would compiling such a book be impossible (for several reasons), but it would certainly be a chore to use once completed. Aside from originally being a means to promote their proprietary liquor brands, the Mr. Boston guides were meant to be a speedy, convenient tool to allow both professional barkeeps and homebound hosts to deliver a variety of drinks with minimum of fuss.

Taking this into account, the Mr. B. books are small (their pocket-sized dimensions have scarcely changed since their inception), yet despite their size they hold a surprising number of recipes. While being far from the vast compendium of drink recipes Mr. Boston detractors often yearn for, the books do an admirable job of collecting both classic and contemporary recipes into a single source. There's a reason that you'll likely find one of the little red books behind almost any bar...they're easy to use, and probably have what your guest is looking for.

That being said, I will concede there are always a handful of recipes in any Mr. B. edition that will cause a giant cartoon question-mark to spring up over your head. One such recipe, the "High Plains Drifter No. 1" (listed above) is from the 2009 edition.

I can only assume the drink was inspired by the movie of the same name. One of the classic Clint Eastwood "man with no name" films, High Plains Drifter is an excellent example of the "spaghetti western" genre, even though it was directed by Eastwood and filmed in the U.S. (In the interest of full disclosure, it's also one of my all-time favorite movies).

In a nutshell, it's a good drink. On paper it looks a bit suspect, but the flavors marry wonderfully. Conceptually, the Tequila makes sense, and the Campari is probably a nod to the Leone-inspired tone of the film. The honey syrup is thematically incongruous, but allowances must be made in pursuit of a good drink. While no specific Tequila brand is mentioned, I used Innocente, a smoothly-textured blanco that meshes seamlessly with the tart, sweet, and bitter flavors of the other ingredients. I also tried it with some spicier brands, so if you like your Tequila drinks with a little more edge, I suggest experimenting until you find one that suits your taste. Either way, it's a cocktail that is shockingly easy to drink, so proceed with caution.

And if a mysterious stranger wanders into your bar asking for one, I suggest you make it for him quickly and just leave him alone.