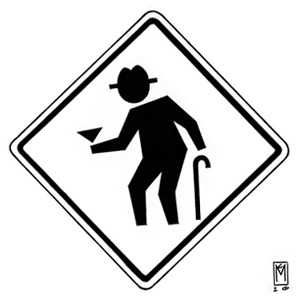 Shake with ice and strain into a chilled cocktail glass. Garnish with a lemon twist.

It's not just liquor companies that send me free stuff. I also receive the occasional book (so I have something to read while I'm drinking, presumably). The latest such offering to grace my mailbox is Old Man Drinks, a pocket-sized tome that's a collection of both classic drink recipes and nuggets of wisdom from actual old men (complete with photos, in case there was any doubt as to who all the great observations are attributable to ).

While thumbing through this bar guide/philosophy compilation, I was prompted to consider what might be my favorite type of drinking establishment: The Old Man Bar.

There's many types of bars- dives, chains, sports bars, tiki bars, craft cocktail emporiums and pick-up joints, just to name a few. They've all got their relative merits (with the exception of sports bars- those places are awful), but if you put a gun to my head, I'd have to confess my favorite bars are Old Man Bars.

Every marginally civilized town (and probably several that aren't) has an Old Man Bar. Even if the locals never explicitly use the phrase "Old Man Bar", it's understood that certain watering holes are the province of men of a certain age and temperament. I don't mean a bar that has a few older gentlemen who pop in for the occasional drink. I'm talking about a place that seems to be populated exclusively by gray-headed, weather-beaten dudes who have some serious mileage on them.

How can you tell if a place is a genuine Old Man Bar? You can often spot an Old Man Bar without ever venturing inside...they have an indefinable aura that sets them apart from just a regular "dive" bar (with which they're often confused). Dives and Old Man Bars do share some similar characteristics, but determining if you have an authentic Old Man Bar is more intuition and experience than anything else. One example: Is the sign outside is the kind where you can make your own message with removable letters and the whole affair is designed to be pulled around like a trailer? It's a dive. Is the sign made of yellowed plastic, bolted to the wall with rusting brackets and emblazoned with a brand like Ballantine or Schaefer? Old Man Bar.

Again, dives and Old Man Bars can be hard to distinguish from one another at first glance. The only way to be 100% sure is to go inside. This should remove any doubt as to whether you have entered a true Old Man Bar. Things to look for include:

Obviously, these are just a few indicators. A canonical list is impossible, because a true Old Man Bar can't be determined by simply checking off items on a list. It's more elusive than that. When you find yourself in a real Old Man Bar you just know.

Should you conclude that you have, in fact, stepped into an Old Man Bar, definitely stay for a round or two. And be respectful. Most old guys love the opportunity to share stories or just shoot the breeze with someone new, provided you aren't a jackass. Remember that that the average regular at an Old Man Bar didn't put up with much guff when he was younger and he certainly ain't taking any more of it now.

And for God's sake don't order a Lemon Drop.

*Generally, I like Bourbons like Bulleit, Buffalo Trace, Woodford Reserve and so on, but for true Old Man cred, you'd probably want something like Jim Beam, Wild Turkey, Evan Williams, etc.)

** A true Old Man would probably just blow the dust off some fossilized Martini & Rossi, but do yourself a favor and get a fresh bottle of something like Noilly Prat, Vya or Dolin). Poor-quality vermouth is lousy to begin with, and it doesn't get any better the longer it sits around.