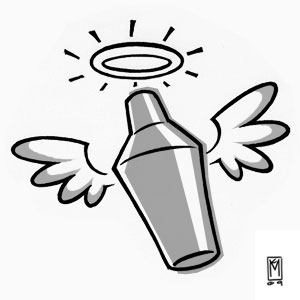 Not every drink has to be a sledgehammer. There is a segment of the drinking community that believes the only drink worth having is one that's composed of 100% heavy-duty spirits and kicks like an elephant gun. While there are plenty of occasions where a drink like that is entirely appropriate, there are many times when you just need something a little less...direct.

This is not to say that your drink has to completely roll over and play dead either. Personally, I've never been a fan of drinks that try to camouflage their lack of alcohol. I recognize their place in the cocktail pantheon, but virgin Bloody Marys and ShirleyTemples just never did it for me.

Likewise, I'm not fond of drinks that do contain alcohol, but are made in such a way as to render it undetectable. Not only are they potentially dangerous (anyone who has witnessed an unwitting pal go face-down after inhaling a series of Mudslides in rapid succession can attest to this), but I find them disingenuous as well. If I'm having a cocktail, I want to know there's at least some booze present. When someone says, "this is a great drink...I can't even tell it has alcohol in it!", I'm always puzzled. I often wonder if these same people come back from a restaurant and gleefully declare, "I had a great steak..I couldn't even taste the beef!"

So this leads us to the Great Middle (a.k.a the "Happy Medium"). As with many things, drinks lie along a spectrum, with a great many of them falling into the large part between the two ends. These drinks are the adult beverage equivalent of the moderates and centrists that political pundits keep telling us comprise the majority of the voting public, yet never seem to make it onto the airwave or the internet. Maybe these drinks get overshadowed for the same reasons that people without strong partisan affiliations do: Being extreme gets attention.

Thinking along these lines, it's easy to understand the immediate gratification that Jager shots and Cement Mixers bring. One of my old schoolteacher's favorite sayings was, "There's a time and place for everything", and so it goes with razzle-dazzle, high-octane offerings that are the bread and butter of college bars and dance clubs everywhere. In the right environment, under appropriate circumstances, extreme can be exactly what's called for.

But if you aren't in the mood for radical cocktailing, it's a comfort to know that there are plenty of drinks that will get the job done without being shot, chugged, lit on fire or served from a Super-Soaker by bar staff wearing bikinis and sombreros. The Blue Angel is merely one of many.

Sure, you'll likely have to make it at home (the parfait amour virtually guarantees it), but then again, it's not a drink that's really standard bar fare- It would probably be a tough sell at even the most discerning watering holes. It's designation as an after-dinner/dessert drink makes it even more so. However, there's something to be said for the kind of cocktail that demands a bit of grace in the assembly and patience in the consumption.

Abraham Lincoln once referred to "the better angels of our nature." He used it in the context of some pretty important stuff that was going on at the time, but it's a sound sentiment that can be applied to drink-making as well.

Listen to those better angels now and then...they probably won't steer you wrong.