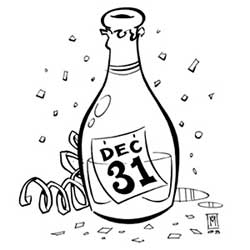 I have a friend who refers to New Year's Eve as "amateur night." He makes a strict policy of not going anywhere outside his house on the evening of December 31st. It doesn't matter whether the festivities take place at a dive bar, posh ballroom, or a friend's living room- he doesn't go out. Period.

My friend's reluctance to publicly expose himself to the hazards of the last day of the year are based primarily on his unwillingness to be killed by a drunk driver. Fair enough...I think we all can see the logic behind that rationale. But he also cites another reason- a far more insidious and harder-to-predict phenomenon. We're talking about people for whom the latter half of day 365 is a free-fire zone of alcohol abuse.

Now before anyone thinks I'm going to wag my finger and scold anyone pre-emptively about proper behavior while imbibing, let me put your fears to rest. That is not my intent. Rather, what I'd like to do is simply offer a brief guide to some of the people you may find yourself drinking with if you leave your house on New Year's Eve. If you spot them early enough, you can hopefully take appropriate action and not be caught unaware.

My advice is to do what they do in Spain in Portugal on New Year's Eve: Stay home and eat 12 grapes (it's true...look it up). THEN you can decide if you want to go out to celebrate the new year. Speaking of grapes and the new year, here's a recipe inspired by those exact things...