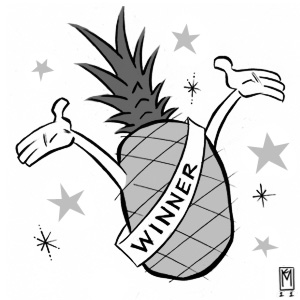 Shake in an iced cocktail shaker and strain into cocktail glass.

~ from "Vintage Spirits and Forgotten Cocktails" by Ted Haigh

Consider the pineapple. It's not likely the first bit of produce that comes to mind when thinking about cocktail ingredients. Mention pineapples and cocktails in the same breath, and nine out of ten people will immediately think of the Pina Colada. Not a bad drink, but it's a bit shopworn at this point, and there are a few other ways to show off the unique flavor and charm of pineapple in a cocktail.

First, let's talk tiki drinks. Tiki and faux-Polynesian cocktails are the most visible example of pineapple being showcased as a drink ingredient. Much like its frequent partner-in-crime the coconut, pineapple's distinct taste instantly evokes warm island climates and is a crucial component in several classic tiki drink recipes such as the Painkiller (a Pina Colada-killer if there ever was one), Rum Barrel, and certain versions of the Zombie and Singapore Sling. Even contemporary tiki classics like the Miehana use pineapple to great effect, giving the drink a signature tropical character. However, If you choose to forgo the labor-intensive demands of most tiki drinks, remember that the pineapple/rum combo is a natural flavor match, and you can often reduce elaborate recipes to their bare bones and enjoy a perfectly delightful cocktail using just rum, pineapple and one or two other ingredients.

Next, it's important to recognize that not all drinks containing pineapple need to be served in a mug with a scary face and a fruity totem pole sticking out of them. Plenty of conventional cocktails make use of it, and there are many recipes that are both flavorful and elegantly balanced. It is a testament to the versatility of pineapple that it can be combined with almost any base spirit, and with a little searching, you can find one to suit your preferences. A few examples include the Mary Pickford (rum), Algonquin (whiskey), Park Avenue (gin), Matador (Tequila), Jackhammer (vodka). And if your tastes lean toward shooters, there's always the indefatigable Surfer on Acid (Malibu rum, Jagermeister and pineapple). Like many cocktail modifiers, pineapple lends itself to creativity and experimentation, and can be used in the creation of syrups, tinctures and bitters as well.

Lastly, we don't want to overlook the pineapple's uses outside the drink itself. In addition to being a superb ingredient, a pineapple can yield many decorative garnishes and actually serve as a drinking vessel itself, provided you are willing to put in a little effort. On the garnish side, there's the venerable "chunk", a rectangular or wedge-shaped bit of the inner fruit that has been employed in more ways than can be listed here. Whether it's simply placed on the rim of the glass or skewered along with other colorful bits of flora, a pineapple chunk is one of the premier workhorse garnishes. We also can't ignore the ring, which has found a home in many a punchbowl or pitcher of sangria. And the leaves, either singly or in a bunch, can create a vivid visual accent on almost any style of drink.

Oh, and the part about drinking out of a pineapple? Do it. Sure, it takes a little careful knife work to hollow out a pineapple, but once you've done it successfully, no one can beat you for style points.